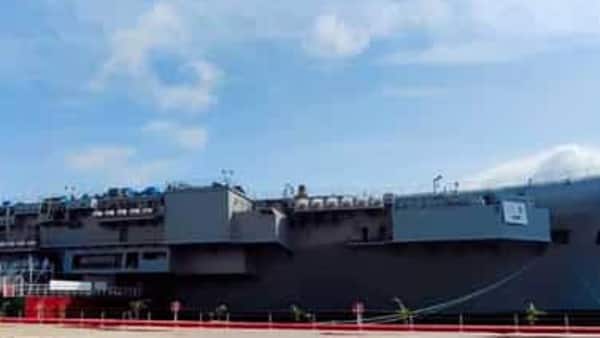 Describing the Indigenous Aircraft Carrier (IAC) as “India’s pride and a shining example of Atmanirbhar Bharat,” the defence minister said the “commissioning of the IAC next year will be a befitting tribute to 75 years of India’s independence.”

“The combat capability, reach and versatility of the aircraft carrier will add formidable capabilities in the defence of our country and help secure India’s interests in the maritime domain,” the minister said.

Our impetus to modernisation, harnessing India’s indigenous industry and know-how, is a key priority. 42 of the 44 warships on order being built at Indian shipyards is a testimony to this,” the minister said, adding that the IAC “boasts of nearly 75% indigenous content, from design, to steel used in construction, to key weapons and sensors.”

The Defence Acquisition Council, headed by Singh, had recently accorded approval for request for proposals for building submarines for the Indian Navy under the Strategic Partnership model ie an Indian company partnering with a foreign original equipment manufacturer, Singh said. This will give a “further fillip to indigenous development of niche manufacturing technologies”

The Modi government has been keen that India develop its own defence hardware manufacturing industry, cutting reliance on foreign vendors. It has listed more than 200 pieces of hardware whose imports are to be phased out in the coming years. Last year, Prime Minister Narendra Modi set the Indian defence industry a target of $ 5 billion in defence exports by 2025.

In his comments, Singh said he had on Thursday reviewed Project Seabird at Karwar, ie the development of the Indian Navy’s largest base, on the west coast of the country. The facility will “provide the infrastructure to support the Navy’s operations in the Indian Ocean Region and beyond,” he said adding that the Modi government was “fully committed to a strong Navy and these two projects (the IAC and Project Seabird) are examples of our unwavering focus.”

“These measures will help enhance the Indian Navy’s operational reach and prowess to protect India’s maritime interests,” he said.

Phase II of Project Seabird was cleared by the Cabinet Committee on Security in 2012. It envisages expanding facilities to house additional warships and set up a new Naval Air Station besides other plans. The Indian Navy’s aircraft carrier the INS Vikramaditya is based at Karwar. The base also boasts of the country’s first sealift facility, a unique “shiplift” and transfer system for docking and un-docking ships and submarines.

Saying that the Indian Navy remained “poised and combat ready to tackle any challenge”, Singh said naval forces’ “proactive forward deployment during the Galwan standoff signalled our intent that we seek peace but are ready for any eventuality.”

The reference was to the confrontation with China that took a violent turn in Galwan in eastern Ladakh in June last year. The clash at Galwan, the first in more than four decades, resulted in the deaths of 20 Indian soldiers with an unknown number of Chinese personnel killed though Beijing has put the number at four.