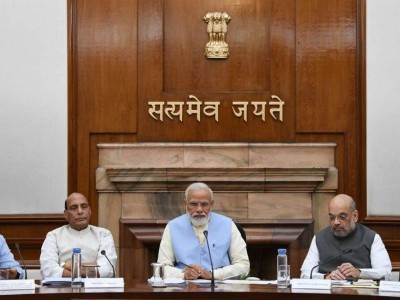 New Delhi: After Prime Minister Narendra Modi recalled the “dark days” of Emergency and called for strengthening the country’s democratic spirit, the Congress hit back alleging India is under “Modi-gency” for seven years where institutions have been undermined and democracy trampled.

Congress general secretary and chief spokesperson Randeep Surjewala also said the time has come when people rise in unison to assess the “annihilation of the very foundation of democracy in India by an arbitrary Modi regime”.

His comments came after Modi in a tweet said “the dark days of Emergency can never be forgotten”.

“The period from 1975 to 1977 witnessed a systematic destruction of institutions.

“Let us pledge to do everything possible to strengthen India’s democratic spirit, and live up to the values enshrined in our Constitution,” Modi said.

Today is the 46th anniversary of the Emergency. On this day in 1975, the then prime minister Indira Gandhi had imposed Emergency in the country.

Hitting back at Modi, Surjewala tweeted, “Says a PM, who is synonymous with three ‘S’ – Suppress, Stifle and Subjugate.”

The Congress leader said that in seven years of Modi rule, “Emergency has now derived a new meaning — that is Modi-gency”.

He said in the last 73 years, for the first time the Supreme Court judges are forced to hold a press conference to air their grievances including the murder of a judge and for the first time, Parliament has come to a halt with pandemic being used to do away with the parliamentary oversight of the government.

“From Election Commission to CAG to CVC, all institutional oversight mechanism over the decisions of the executive have been stifled and subjugated. The agencies of the government like the CBI and Income Tax have become BJP revenge machines against political opponents,” he alleged.

“Elected governments have been brutally sidelined with scant regard for majority and people’s mandate. A unitary authoritarian regime led by two people — the prime minister and the home minister rule by force and dictatorship and not by law and the Constitution,” Surjewala further alleged.

“We live in a regime which reminds of ‘brutal Nazi style dictatorship’. Yet the Prime Minister speaks about Emergency. The entire discourse is a sham and time has come when people rise in unison to assess the annihilation of the very foundation of democracy in India by an arbitrary Modi regime,” he claimed.