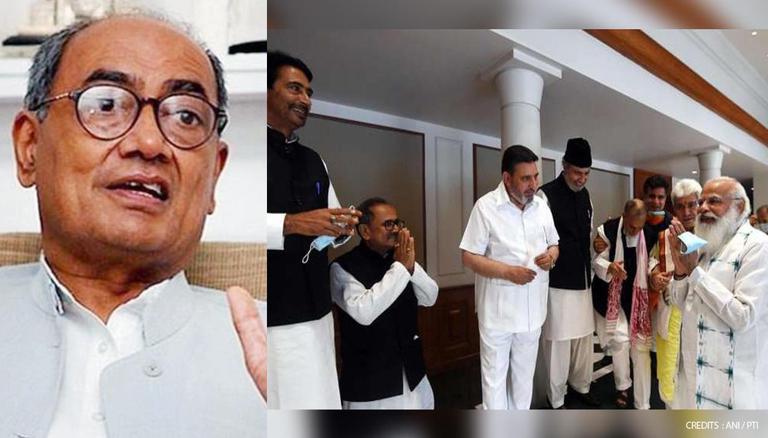 Weeks after the leak of his alleged Clubhouse chat hinting at the return of Article 370 when his party is voted to power, veteran Congress leader Digvijaya Singh on Friday issued his response to Prime Minister Narendra Modi’s first meeting with mainstream leaders of Jammu & Kashmir since the abrogation of the bifurcated state’s special status. Welcoming the meeting, the former Madhya Pradesh CM was critical of the delay in discussions as he remarked that the Prime Minister should have called such a meeting before abrogating Article 370 in 2019. Pertinently, Congress’ 5 demands, placed by Ghulam Nabi Azad in the meeting at 7 Lok Kalyan Marg, did not mention Article 370 in any manner.

Praising former Prime Minister Atal Bihari Vajpayee’s solution of ‘Insaniyat, Jamhuriyat, Kashmiriyat,’ the veteran Congress leader said that PM Modi, in contrast, did not consult anyone before the abrogation, adding that had he called for a meeting prior, there would be no problem now. Digvijaya Singh alleged that contrary to PM Modi’s claims that terrorism would end, investments would be brought in and Kashmiri Pandits would also return when Article 370 is abrogated, the ex-CM said that nothing had happened so far.

“Yesterday the meeting which he called, had he done the same meet before taking a decision on Kashmir such problem would not have happened. Modi Ji takes the decision first and then thinks, he did the same thing with Demonistisation,” Divijaya Singh said told media on Friday.

Moreover, the Congress leader also said that the Centre should reveal whether talks have taken place in Doha with the Taliban, claiming that New Delhi has held such secret discussions which have been affirmed by Qatar Ambassador. In view of NSA Ajit Doval’s meeting with his Pakistani counterpart at the SCO, Singh also opined that India should not hold any discussions with Pakistan until those who conspired the terrorist attack on Mumbai are brought to the book.

Earlier this month, BJP IT Cell chief Amit Malviya shared a clip of an alleged Clubhouse chat of the Congress party, where senior leader and Madhya Pradesh MP Digvijaya Singh can be heard hinting at a possible return of Article 370 in Jammu and Kashmir, when his party returns to power. In the 1-minute clip shared by Malviya, Digvijaya Singh allegedly tells a Pakistani journalist that the decision to revoke Article 370 was an ‘extremely sad decision,’ and that when the Congress comes to power, they will ‘certainly have to relook on this issue.’

“Democracy was not there in Kashmir when they revoked Article 370. Their insaniyat (humanity) was not there because they put everyone behind bars, and kashmiriyat is something which is basically the fundamentals of secularism. In a Muslim-majority state, there is Hindu praja and both work together. The reservation in Kashmir is given to Kashmiri pandits in government services. Therefore decision of revoking Article 370 and revoking the statehood of J&K is an extremely sad decision and the Congress party will certainly have to have a relook on this issue,” said Digvijay Singh.

In the first meeting between mainstream J&K leaders and PM Modi after the abrogation of Article 370 in 2019, development, elections and statehood were mostly discussed, as per the account of multiple leaders that attended. Prime Minister Narendra Modi, in a tweet after the meeting, said that the Centre is committed to ensuring the all-round development of J&K. He asserted that Indian democracy’s biggest strength is the ability to sit across a table and exchange views. As per sources, the PM in the meeting, also said that he aims at removing ‘Dilli ki Duri’ along with ‘Dil ki Duri’.

Congress’ veteran leader Ghulam Nabi Azad revealed that there were no restrictions in the meeting and representatives were allowed to bring up any issue and speak freely without any time constraint. Divulging details of the meeting to the media, Azad asserted that all parties univocally demanded a ‘full-fledged restoration’ of statehood. He also remarked that the Prime Minister said that he wanted to hold such a meeting earlier but was forced to delay it due to the COVID-19 pandemic. Moreover, Congress also placed 5 demands before the Centre which includes: