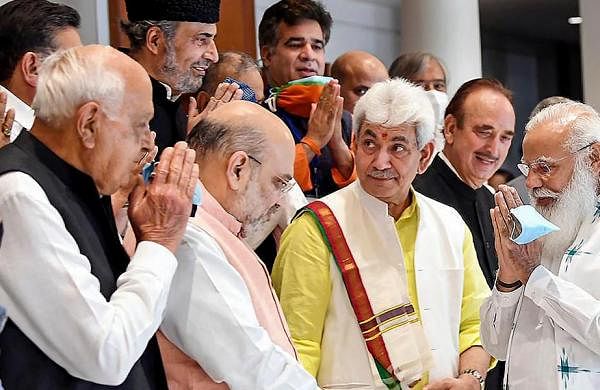 SRINAGAR/NEW DELHI: A day after the Centre unveiled its roadmap for the resumption of the democratic process in J&K, leaders of several parties said restoration of statehood must precede Assembly elections, while PDP chief Mehbooba Mufti claimed she would not enter the fray till special status under Article 370 is restored, though her party would.

Explaining her rationale, Mehbooba said, “Otherwise they will say I am doing it for political gains. If PDP wins the polls, I will not be chief minister.” However, she said that her party would contest the polls as it cannot leave any democratic space otherwise it will be taken away by other forces.

Mehbooba is the third J&K leader to decide not to contest polls. NC vice-president Omar Abdullah and another party leader Aga Ruhullah have already made their entering the fray conditional to the restoration of full statehood.

Senior National Conference leader and Gupkar Alliance coordinator Justice (Retd) Hasnain Masoodi said holding of polls while J&K remains a Union Territory is not acceptable. “In Assam, they kept on hold the delimitation process and held Assembly elections while here they say delimitation will precede elections (while it remains a UT),” he pointed out.

Another NC leader Imran Nabi Dar said the party’s position is clear: grant of statehood should be the first confidence building measure of the Centre.

Articulating the stand of the Congress, senior party leader P Chidambaram said: “Congress and other J&K parties and leaders want statehood first and elections afterwards. Government’s response is elections first and statehood later. The horse pulls the cart. A state must conduct elections. Only such elections will be free and fair. Why does the government want the cart in front and the horse behind? It is bizarre.”

Senior CPM leader Mohammad Yousuf Tarigami, who is also spokesperson of the Gupkar Alliance, told this newspaper that they had not attended the all-party meet in Delhi for holding elections. “None of us had gone there to demand elections,Tarigami said.

Union home minister Amit Shah had on Thursday told the all-party meeting chaired by Prime Minister Narendra Modi that while the Centre is committed to restoring statehood, it will happen after the delimitation process and the Assembly elections are over. “We did not get answers to our concerns. The PM did not offer anything concrete in terms of assurances,” Tarigami said.

PDP
State polls after restoration of special status under Article 370