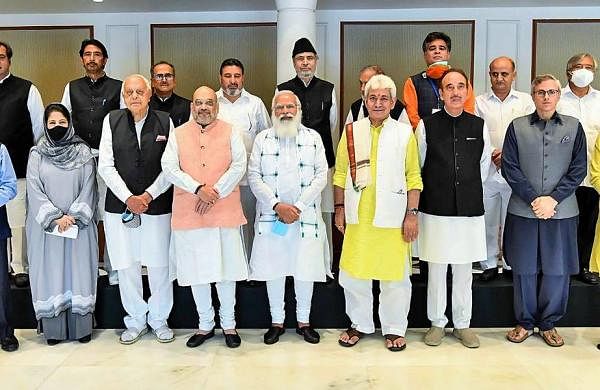 NEW DELHI:  The first steps towards removing “Dil ki doori aur Dilli ki doori” as PM Narendra Modi put it in his meeting with 14 leaders from J&K were taken well before their meeting on Thursday.

A few political leaders in detention were released days before the high-profile meeting was held in the capital and sources in Ministry of Home Affairs say that a committee will be formed by J&K L-G Manoj Sinha, who will go through the list of remaining detainees on a case-to-case basis. Release of more political detainees could be seen soon.

“The L-G will constitute a committee which will go through a list of 40 people who are in custody under the PSA. Most of them belong to political parties. Based on various factors and depending on the feedback from security agencies their release will be looked into,” a source in the Ministry of Home Affairs told The New Indian Express. “Cases of those who were not charged with offences of violence will be reviewed,” the sources added.

BJP leader and former J&K deputy CM Nirmal Singh, who attended the meeting, said: “In the meeting, the home minister shared data of detainees under PSA who are still in custody. He said there are 40 people who are detained under the PSA, and he said their cases will be reviewed by a committee.”

Release of political prisoners was one of the key demands made by various leaders, including Congress’s Ghulam Nabi Azad, in the meeting with the PM and Home Minister Amit Shah.

In fact, in the run up to the meeting held on Thursday, several political detainees such as PDP’s Naeem Akhtar and Sartaj Madni were released last week. Akhtar was first detained in August 2019 and booked again under the PSA.

After being released in June 2020 he was again taken into custody in December last year. Madni, the uncle of former CM Mehbooba Mufti, was released after six months of detention on Saturday and a day later Akhtar was also released.

Experts have welcomed these developments. “In 2004 after the Hurriyat held two rounds of talks with the then deputy PM LK Advani, Advaniji asked them what it is that they want. They asked for the release of political prisoners. I think they gave a list of some 35 people of which the government ordered the release of around 12,” said AS Dulat, the former R&AW chief.

Skandan Krishnan, a former IAS officer who served as an advisor to former J&K governor Satyapal Malik said “such a move will give the biggest fillip to the local parties”.