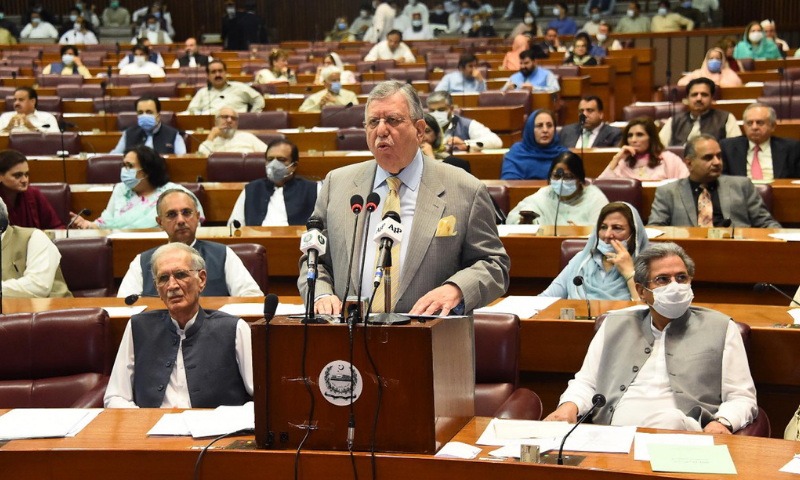 ISLAMABAD: Terming the federal budget a step forward towards the country’s transformation into the state of Madina, Finance Minister Shaukat Tarin on Friday said the government had rejected the directives of the International Monetary Fund (IMF) regarding further hike in gas and electricity tariffs.

Concluding budget debate in the National Assembly, that lasted for 11 days, he said Prime Minister Imran Khan had stabilised the crippling economy by taking some “bold” steps and contrary to the expectations of even IMF and the World Bank, the country’s GDP growth rose up to four per cent in the fiscal year 2020-21.

“It is because of Imran Khan that much needed foreclosure laws were amended after which banks were ready to give housing loans on mortgage basis,” he said. “All previous governments wanted to do this but failed to do so.”

He said despite three waves of Covid-19 and crippling economic situation, the prime minister took many sagacious decisions like imposition of smart lockdown and as a result the wheel of the industry continued to run and the country did not suffer as much as others.

Tarin says govt will focus on sustainable growth, uplifting the lot of poor people in next fiscal

Mr Tarin said in the next fiscal year, starting from July 1, the government would focus on sustainable growth and uplifting the lot of poor people.

“We will do what had not been for the poor for the last 70 years,” he said, adding that the government was taking steps which would directly give some relief to the poor.

He said the government had chalked out a strategy to provide affordable houses to four million families. Similarly, Rs500,000 agriculture loans will be given to the farmers and in urban areas interest-free loan of similar amount will be given to the individuals to enable them to start small businesses.

Under another direct relief plan, the government was issuing health card to each Pakistani. He said the government would also impart skill training to one person in a poor family so that the skilled person could support his/her family.

He said record 40 per cent increase had been made in the allocations for the Public Sector Development Programme in the budget 2021-22 as its volume had been increased from Rs630bn to Rs900bn. “With this development will be seen in Balochistan, tribal areas merged with Khyber Pakhtunkhwa, Gilgit-Baltistan and Sindh,” he added.

The finance minister vowed to bring down fiscal deficit to zero. “We have already reduced fiscal deficit from 7pc to 6.3pc and the current primary deficit — 3.8pc — will be reduced to 0.6pc,” he claimed.

The minister said a comprehensive plan was being introduced to make the country self-sufficient in agricultural products. Under the plan, storage facilities would be constructed in rural areas and a network of agri malls would be set up in the country to end monopoly of the middle man who got 400pc to 500pc profit on fruits and vegetables and caused hike in their prices.

He hoped that Pakistan’s exports would be increased in the coming years as the government had met all demands of exporters in different fields.

He said Rs30bn had been earmarked for construction and housing sector. He said the government was also determined to take maximum advantage of the China-Pakistan Economic Corridor (CPEC). “We have addressed all concerns of China and now CPEC will take off,” he added.

An amount of Rs260bn had been allocated for Ehsaas programme to provide monetary assistance to poor families, he said.

Mr Tarin said Pakistan was facing major structural issues in the power sector as the government had to pay Rs900bn on account of capacity payments for electricity that was not even being utilised. “This also leads to an increase in the circular debt.”

He said there were three solutions to the issue: to let the circular debt increase, increase the budgetary allocation to address the problem, or simply increase electricity tariff.

But the prime minister had been resolute that there would be no increase in the tariff, the finance minister said, adding that the government was employing “out-of-the-box” ways to address the issue.

He assured that the circular debt would begin to decrease in the coming year as steps were being taken to decrease line losses and increase the recoveries of bills.

However, he acknowledged that making improvements in the power sector remained a big challenge for the government.