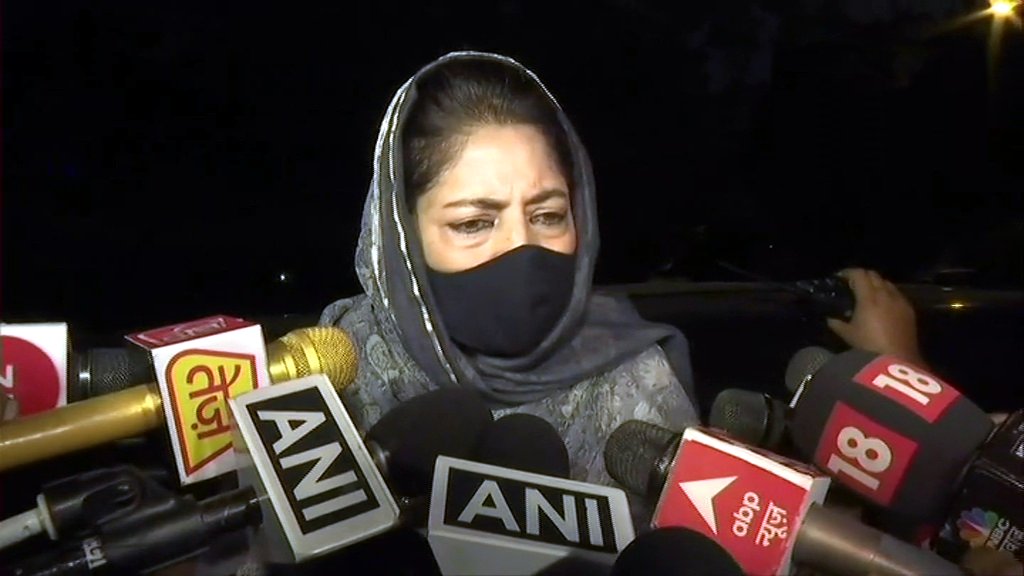 NEW DELHI : Peoples Democratic Party (PDP) chief Mehbooba Mufti on Thursday said that she has told Prime Minister Narendra Modi at the all-party meeting that people of Jammu and Kashmir do not accept the manner in which Article 370 was abrogated “unconstitutionally, illegally and immorally”.
Speaking to media persons after the three and half an hour long meeting, Mufti said, “People of Jammu and Kashmir are in a lot of difficulties after August 5, 2019. They are angry, upset and emotionally shattered. They feel humiliated. I told Prime Minister that people of Jammu and Kashmir do not accept the manner in which Article 370 was abrogated unconstitutionally, illegally and immorally.”
The PDP chief said that they will struggle peacefully even if it takes months or years.
“People of Jammu and Kashmir will struggle constitutionally, democratically, peacefully. Be it months or years, we will restore Article 370 in Jammu and Kashmir as it is a matter of our identity. We did not get it from Pakistan, it was given to us by our country, by Jawaharlal Nehru, Sardar Patel,” she said.
This was the first meeting between the Centre with the political leaders of the region after the abrogation of Article 370 in August 2019 and bifurcation of Jammu and Kashmir into two union territories.
The PDP president said that she congratulated the Prime Minster over holding talks with Pakistan, which reduced infiltration in the union territory, and added that the government should instead talk about the halted trade.
“I congratulated him that they talked to Pakistan and it led to ceasefire, less infiltration. For peace of Jammu and Kashmir if they have to talk to Pakistan again, they should. They should also talk to Pakistan about trade with them that has halted, it is a source of employment for many,” she said.
The meeting began at around 3 pm and was attended by 14 prominent leaders from Jammu and Kashmir.
Among the leaders who are participated in the meeting were Congress’ Ghulam Nabi Azad, Tara Chand and GA Mir; National Conference’s Dr Farooq Abdullah and Omar Abdullah; PDP’s Mehbooba Mufti, J-K Apni Party’s Altaf Bukhari; BJP’s Ravinder Raina, Nirmal Singh, and Kavinder Gupta; CPI(M)’s M Y Tarigami; National Panthers Party’s Prof Bheem Singh; and Peoples Conference’s Sajad Gani Lone.
Home Minister Amit Shah, National Security Advisor Ajit Doval, Jammu and Kashmir Lt Governor Manoj Sinha and Home Secretary also attended the meeting. (Agency)