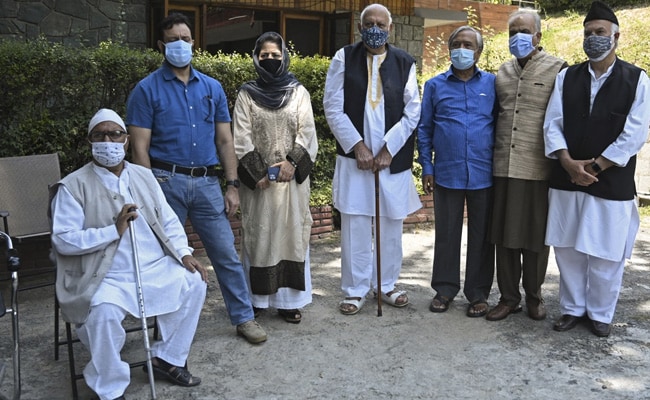 Four former J&K Chief Ministers are among the 14 leaders invited to the meeting.

Nearly two years after Jammu and Kashmir lost its special status and was downgraded into two Union Territories, Prime Minister Narendra Modi has called political parties to discuss the road ahead. This is the PM’s first outreach towards parties that have denounced what is possibly his biggest political decision.

Four former J&K Chief Ministers are among the 14 leaders invited to the meeting. Three of them, National Conference leader Farooq Abdullah, his son Omar Abdullah and PDP chief Mehbooba Mufti, were jailed for six months to one year from August 5, 2019, when the changes were enforced.

There is no specific agenda for the meeting. Leaders participating in it say, however, that their agenda is very clear — Jammu and Kashmir, the decision taken by the Prime Minister on August 5 and restoration of statehood.

Many reports say the meeting may focus on the delimitation exercise to redraw the boundaries of assembly constituencies in J&K ahead of assembly elections.

Legal experts say delimitation is not for political discussion; the Delimitation Commission is an independent body and the executive and political parties cannot interfere in its functioning.

Three National Conference MPs including Farooq Abdullah who had boycotted meetings of the Delimitation Commission have indicated that they will join the proceedings if the chairman of the Commission addresses their concerns since a case is pending before the Supreme Court.

“Delimitation is based on the census. There is a constitutional as well as statutory bar on maintaining a challenge against the order of a Delimitation Commission before any court of law” said Shoaib Alam, Supreme Court lawyer.

Some groups in Jammu have been strongly opposing the delimitation exercise because Census 2011 will only favour the Kashmir Valley.

The new legislature in J&K will have 90 seats, seven higher than the previous assembly.

The leaders of the Gupkar alliance, a group of seven parties led by Farooq Abdullah and Mehbooba Mufti, say they will forcefully raise the issue of Article 370 with PM Modi and they have “no red lines” for any discussion during the meeting.

“The meeting was called by the Prime Minister. We see it a positive development. There are no riders. No one has been asked not to talk about restoration of J&K’s special status,” said a senior leader.

The all-party meeting is taking place alongside reports that National Security Adviser Ajit Doval met with his Pakistan counterpart in a third country.

Today’s meeting is the second major peace initiative in J&K after the announcement of ceasefire between India and Pakistan on February 25.

In a joint statement, the Director Generals of Military Operations of the Indian and Pakistan armies agreed to “address each others core issues and concerns which have propensity to disturb peace”.

Political observers say this was the first move in military diplomacy and today’s meeting is part of a larger peace initiative at a time when India is facing a major challenge along the Line of Actual Control in Ladakh, where the Indian Army and the Chinese troops have been locked in a tense confrontation since May last year.

In the last 22 months, Kashmir has gone through the world’s longest internet blockade, strict curfew for months and an unprecedented clampdown in which thousands of people were jailed to prevent any protest against the abrogation of Article 370.

Before the historic changes, Jammu and Kashmir was India’s only state with its own separate constitution and flag.

The BJP and the central government defended the decisions saying they would bring prosperity and development in a “Naya (New)” Kashmir. Jailed Kashmiri Leaders were dubbed as corrupt and responsible for all miseries the region has gone through.

In November, Home Minister Amit Shah termed the leaders of Gupkar alliance as the “Gupkar Gang” who wanted foreign forces to intervene.

Six months later on June 18 (last week), the government sent an invite to them.

Kashmiri leaders say they will stick to their stand on the restoration of special status.