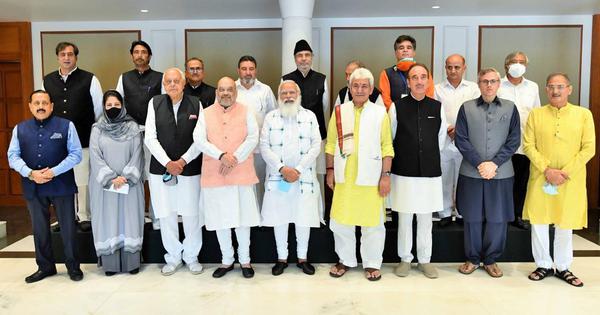 Prime Minister Narendra Modi on Thursday held talks with the leaders of political parties in Jammu and Kashmir, reported ANI.

This is the first meeting between the Centre and political parties from the erstwhile state since its special status was abrogated and was split into two Union Territories in August 2019. No specific agenda has been decided for the meeting, but the Union government is expected to discuss delimitation, or, the process of redrawing Lok Sabha and Assembly constituencies in the Union Territory. Jammu and Kashmir leaders have said they would discuss the matter of full statehood and the restoration of special status.

Farooq Abdullah, after arriving at the meeting, refused to speak about the demands that his party will raise. He also refused to comment on Mufti’s remarks that political parties want the special status restored. “Mehbooba Mufti is the president of her party, why should I speak on what she said,” Abdullah told reporters.

However, Communist Party of India leader Yousuf Tarigami said that his party will urge the Centre and the prime minister to reconsider the restoration of special status. “Our expectations are that it [the meeting] should be a good beginning to resolve the issues, concerns of the people of Jammu and Kashmir and Ladakh,” he said. “Whatever has been done to us is not within the limits of the Constitution. Our rights, guaranteed under the provisions of the Constitution of India, have been snatched from us”.

Talking to reporters, Bhim Singh also demanded the restoration of the special status of the erstwhile state.

On Wednesday, the Election Commission had held a virtual meeting with the deputy commissioners of all Jammu and Kashmir districts to discuss details about the existing electoral constituencies.

Delimitation of Jammu and Kashmir

According to the Jammu and Kashmir Reorganisation Act, 2019, which was passed by Parliament in August 2019 and came into effect in October 2019, Jammu and Kashmir will have a legislative Assembly while the Union Territory of Ladakh will not.

The reorganisation Act had stipulated that the number of seats in the Jammu and Kashmir state Assembly will be raised from 107 to 114 and delimitation will provide for reserved seats for Scheduled Castes and Scheduled Tribes.