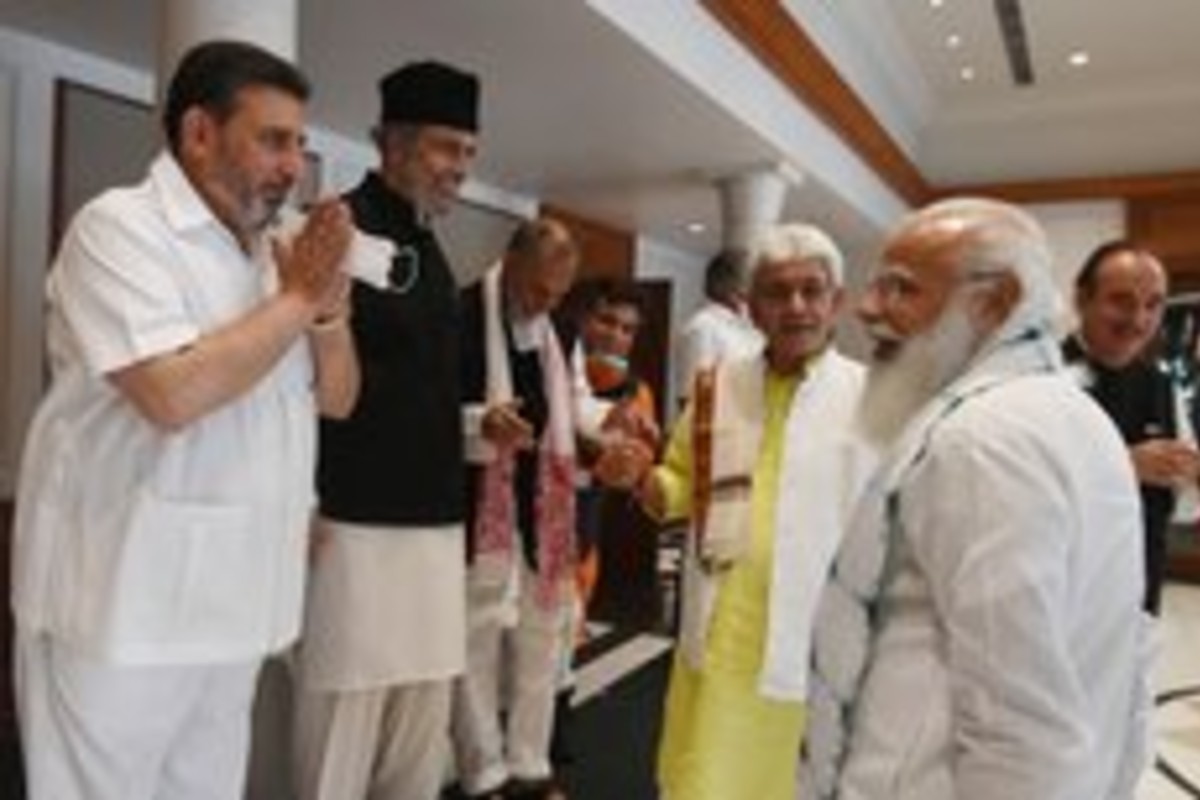 Nearly two years after the bifurcation of Jammu and Kashmir into two Union Territories and revocation of its special status, Prime Minister Narendra Modi on Thursday held talks with top political leaders from the erstwhile state, and said the Union government’s priority is to strengthen grassroots democracy there for which delimitation has to happen quickly so that polls can be held.

Modi’s J&K outreach also saw the Prime Minister conveying to the 14 political leaders from the union territory during their face-to-face meeting in New Delhi that he wanted to end the ‘Dilli ki Duri’ as well as ‘Dil ki Duri’ (distance from Delhi as well as distance of hearts) with Jammu and Kashmir, which has witnessed a prolonged spell of militancy and unrest. The participants at the three-and-a-half hour long high-level meeting included four former Chief Ministers.

Official sources said the Prime Minister appreciated the cordial atmosphere of the talks and the frank exchange of views. Union Home Minister Amit Shah, who was also present at the meeting, tweeted to say the delimitation exercise and holding of peaceful elections in the Union Territory are important milestones in restoring statehood as promised in the Parliament.

Omar Abdullah, a former CM and leader of the National Conference(NC), said both Prime Minister Modi and Home Minister Shah assured that they were committed to the restoration of Jammu and Kashmir’s statehood. “The takeaway from the meeting was that the PM said that he wanted to remove ‘Dil ki duri and Dilli ki duri’ but I as well as other leaders are sure that one meeting is not enough for the same. However, a process has begun,” Omar said. The meeting was held at the Prime Minister’s 7, Lok Kalyan Marg residence.

In a series of tweets, Modi said the deliberations were an important step in the ongoing efforts towards a developed and progressive Jammu and Kashmir where all-round growth is furthered. “Our priority is to strengthen grassroots democracy in J&K. Delimitation has to happen at a quick pace so that polls can happen and J&K gets an elected Government that gives strength to J&K’s development trajectory,” he said. The Prime Minister said it was the biggest strength of Indian democracy that people can sit across a table and exchange views.

This is the first interaction between the top leadership of the Union government and mainstream parties in J&K since August 5, 2019, when the Indian government revoked its special status provided under Article 370 and bifurcated the border state into Union Territories of Jammu and Kashmir and Ladakh.

Official sources said the PM noted with great satisfaction that the meeting’s proceedings reflected commitment to the territorial integrity of the nation and the Constitution of India. This reinforced belief in the strength of India’s democracy. Home Minister Shah said the meeting was held in a very cordial environment. “Everyone expressed their commitment to democracy and the Constitution. It was stressed to strengthen the democratic process in Jammu and Kashmir,” Shah said in another tweet.

Besides Omar, the other former CMs of the erstwhile state who participated in the discussions were Farooq Abdullah of the NC, Congress’ Ghulam Nabi Azad and PDP chief Mehbooba Mufti. Four former deputy CMs were in attendance too – Congress’ Tara Chand, People’s Conference leader Muzaffar Hussain Baig and BJP’s Nirmal Singh and Kavinder Gupta.

Farooq Abdullah urged Modi to work towards building trust in J and K by ensuring that its full statehood is restored. Talking to PTI, Farooq said his party National Conference would continue to challenge through legal and constitutional means the abrogation of special status of Jammu and Kashmir under Article 370 of the Constitution.

“There is a loss of trust which needs to be restored immediately and for that, to begin with, the Union government should work for restoration of complete statehood to Jammu and Kashmir,” said Farooq, who is a Lok Sabha member.

The National Conference and the PDP said at the meeting that they did not accept the changes effected by the Union government on August 5, 2019, making it clear that they would continue to contest the decisions legally and constitutionally.

PDP president Mehbooba Mufti said she complimented the PM for initiating back-channel talks with Pakistan that led to the ceasefire agreement at the Line of Control (LoC) and decrease in infiltration numbers.

“I have requested the PM that, if need be, we could talk to Pakistan once again for further boosting the peace process,” she said.

On the abrogation of Article 370, Mehbooba said her party would continue to fight for its restoration. “After all, the special status has not been given to us by Pakistan. It was given to us by the late Prime Minister Jawaharlal Nehru and Sardar (Vallabhbhai) Patel. We will continue to fight for restoration of special status through legal and constitutional means,” she said.

Asked by reporters if the issue of J&K politicians being detained post the abrogation of Article 370 was raised during the meeting, Omar said it was brought up by quite a few leaders along with the issue of the trust deficit between leaders of J&K and those in Delhi. “I have never been a person to live in the past..,” he said.

Azad said he put forward various points on behalf of his party which included restoration of complete statehood, followed by elections. “I have also asked for a rehabilitation process for Kashmiri Pandits, release of political prisoners, and domicile rules whereby the Union government guarantees jobs for the people of Jammu and Kashmir,” Azad told reporters.

Officials said the Union government is keen on holding Assembly elections in the union territory as early as possible, maybe in December this year or March 2022 after the Delimitation Commission headed by Justice (retd) Ranjana Desai completes its task of redrawing constituencies in the next few months. The Commission was granted one year’s extension in March this year.