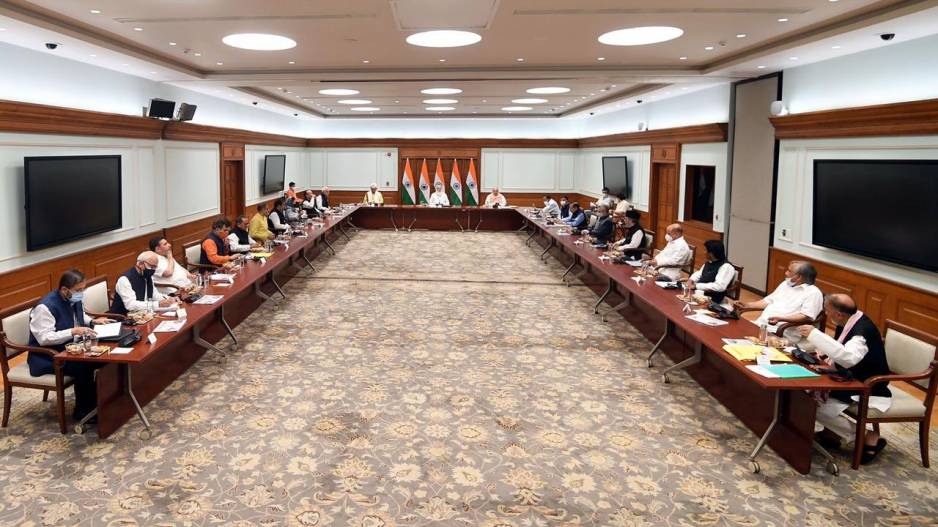 New Delhi: In the government’s first outreach to Jammu and Kashmir’s political leadership in almost two years, Prime Minister Narendra Modi on Thursday held a crucial meeting with 14 leaders, including four former chief ministers, to chalk out the future course of action in the union territory.

This is the first interaction between the Central leadership and the mainstream parties since August 5, 2019, when the Centre revoked Jammu and Kashmir’s special status under Article 370 and bifurcated it into two union territories, Jammu and Kashmir, and Ladakh.

Minister of State in PMO Jitendra Singh, Principal Secretary to the Prime Minister P K Mishra and Union Home Secretary Ajay Bhalla were among those who attended the meeting.

“If India can talk to the Taliban in Doha (Qatar), why not Pakistan,” Mehbooba had said earlier.

“We have not been given an agenda. We will be attending the meeting to know what the Centre is offering,” said Tarigami, who is also spokesperson of the six-party People’s Alliance for Gupkar Declaration (PAGD) that was formed in the aftermath of the August 2019 decisions.

Officials said the Centre is keen on holding assembly elections in the union territory as early as possible, maybe in December this year or March 2022 after the Delimitation Commission headed by Justice (retd) Ranjana Desai completes its task of redrawing constituencies in the next few months. The Commission was granted one year’s extension in March this year.

BJP’s Jammu and Kashmir unit president Raina said Thursday’s interaction convened by the prime minister is in accordance with the wishes of heads of various political parties who have been seeking time from him for a long time.

The meeting seems to be the result of the back-channel talks held with all the parties from the union territory to chart out a roadmap.

The Union Home Minister, while tabling the Jammu and Kashmir Reorganisation Bill 2019 in Parliament, had given an assurance that the Centre would grant full statehood to Jammu and Kashmir at an appropriate time.

Today’s dialogue comes seven months after the District Development Council (DDC) elections in Jammu and Kashmir. The PAGD had surged ahead of the BJP and its allies, including the JKAP, by bagging 110 seats out of 280 with the National Conference emerging stronger with 67 seats within the alliance. The BJP was the single largest party with 75 seats.

Jammu and Kashmir’s political mainstream, especially those with a strong base in the Valley, has been critical of successive administrations of the union territory for allegedly neglecting the demands of the people. It has raised questions on development initiatives since August 2019.

Several leaders, including the Abdullahs and Mehbooba, were detained after the August 2019 decisions.