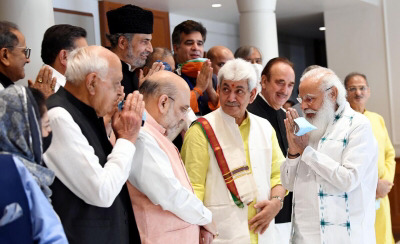 New Delhi: In the first all-party meeting involving leaders from Jammu and Kashmir after the abrogation of Article 370 on August 5, 2019, Prime Minister Narendra Modi on Thursday assured that the Centre is committed to granting statehood to Jammu and Kashmir at the right time.

Meeting the leaders from the Valley, PM Modi said that holding Assembly elections in the region just like the successful conduct of the District Development Council (DDC) polls is a priority.

The PM also appealed to everyone to work in the national interest for the benefit of the people although there are be political differences.

Delimitation, roadmap for Assembly polls, restoration of statehood and bringing back Kashmiri Pandits were the key issues discussed in the crucial all-party meeting on Jammu and Kashmir that was chaired by Prime Minister Modi and involved leaders from different political parties in J&K.

As per sources, the PM heard all the suggestions and inputs put forward by the participants and expressed happiness over everyone sharing their frank and honest views.

It was an open discussion which revolved around building a better future for Kashmir with the main focus on strengthening the democratic process in J&K.

It was proposed that the elections could take place soon after the delimitation process, to which most of participants agreed.

Delimitation is a prerequisite for conducting Assembly polls — something which the authorities and the political class are looking forward to as they seek to kick the political process into a higher gear, an objective which can speed up the development process in J&K.