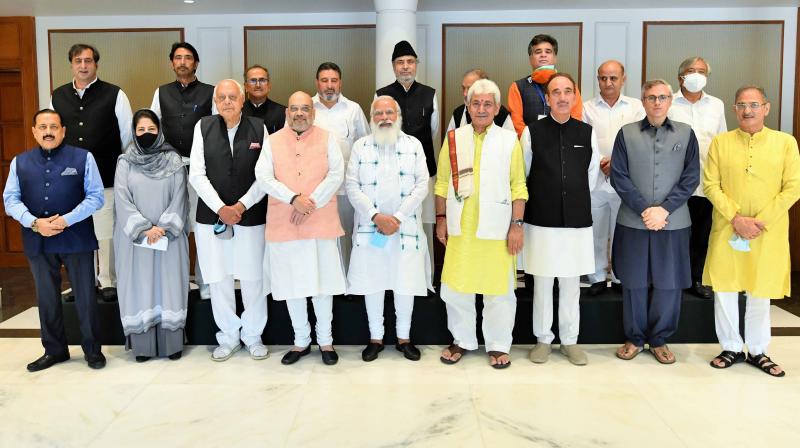 This is the first time top political leaders from J&K held detailed talks with Prime Minister Modi and other Central leaders like Amit Shah since J&K’s special status under Article 370 was abolished in August 2019 and the state was split up into two Union territories of J&K and Ladakh.

Talking to reporters after the meeting, former CM Omar Abdullah said both Mr Modi and Mr Shah pledged they were committed to restoring Jammu and Kashmir’s statehood. “The takeaway from the meeting was that the Prime Minister said he wanted to remove ‘Dil ki doori’ and ‘Dilli ki doori’, but I as well as other leaders are sure that one meeting is not enough. However, a process has begun,” Mr Abdullah said.

He said that his father, National Conference president Farooq Abdullah, said during the meeting that there was an urgent need to rebuild trust in J&K. “The trust deficit among the people of Jammu and Kashmir needs to be addressed to immediately by the Centre, and for that the process of restoration of complete statehood is necessary,” he said.

On the delimitation commission, Mr Abdullah said the central leadership was told that the exercise in itself was defeating the very purpose with which the BJP-led government had carried out the exercise of abrogation of special status on August 5, 2019.

“On one hand the central leadership claimed the decision in August 2019 was taken for a complete merger of Jammu and Kashmir with the Union of India, and on the other Jammu and Kashmir is treated differently by bringing in separate delimitation commissions for Assam and us.

“If the delimitation commission for Assam was withheld and Assembly elections held there, then why not for Jammu and Kashmir? Isn’t this defeating the very purpose of the central leadership?” he asked.

The former CM said even the Central leadership was of the view that the government could not be run by bureaucrats and a political government needed to take charge. Said Mr Abdullah: “Our party president has made it clear that as and when an invite for the (delimitation) commission meeting will come, we will take consider it.”

Senior Congress leader Ghulam Nabi Azad told reporters he put forward various points on behalf of his party at the meeting, including restoration of complete statehood, followed by elections. “I have also asked for a rehabilitation process for Kashmir Pandits, release of political prisoners, and domicile rules whereby the Centre guarantees jobs for the people of Jammu and Kashmir,” Mr Azad told reporters.

PDP president Mehbooba Mufti told reporters the meeting went off well and she complimented the Prime Minister for initiating back-channel talks with Pakistan that led to the ceasefire agreement at the Line of Control and decrease in infiltration levels.

“I have requested the Prime Minister that, if need be, we could talk to Pakistan once again for further boosting the peace process,” she said.

On the abrogation of Article 370, Ms Mufti said her party would continue to fight for its restoration. “After all, the special status has not been given to us by Pakistan. It was given to us by late Prime Minister Jawaharlal Nehru and Sardar (Vallabhbhai) Patel. We will continue to fight for restoration of the special status through legal and constitutional means,” she said.

While stressing on his commitment to granting full statehood once again to J&K PM Modi sought “co-operation and assistance” from the senior State leaders urging them to help in the delimitation process which will help in redrawing new Assembly constituencies to hold elections. Assembly elections in J&K will be held only after the delimitation exercise can be completed. Sources said most J&K leaders at the meeting expressed their willingness in assisting the Election Commission and local administration to help complete the delimitation process at the earliest.

Top government sources said most participants at the meeting agreed on the need to further strengthen the democratic process, and the holding of the District Development Council elections was just the beginning. “Our priority is to strengthen grassroots democracy in J&K. Delimitation has to happen at a quick pace so that polls can happen and J&K gets an elected government that gives strength to J&K’s development trajectory,” Mr Modi said in a tweet after the meeting.

Sources said the Centre also agreed to setting up a committee to review the cases of all political prisoners irrespective of whether they have been released or were still in detention. The committee is likely to be headed by lieutenant-governor Manoj Sinha.

After the meeting, home minister Amit Shah tweeted: “The future of Jammu and Kashmir was discussed, and the delimitation exercise and peaceful elections are important milestones in restoring statehood as promised in Parliament.”

A senior home ministry official said: “Most participants gave very honest and frank opinions during the meeting. It was an open discussion which focused on all major issues related to J&K, whether it was on Article 370, Article 35A or delimitation. We feel in the coming months more such interactions will be held now that the ice has been broken between the Centre and the local J&K leadership.”