Kashmir-based politicians obtained even less from the Centre at Thursday’s talks than one might have expected. There was not even a firm promise of restored statehood, and nothing at all on the earlier special constitutional provisions for the state.

As expected, Prime Minister Narendra Modi urged the political leaders of Jammu and Kashmir to cooperate in the process of delimiting constituencies in the union territory. The promise of Assembly elections is implicit once the delimitation is successfully completed.

Getting the local parties to cooperate in the delimitation is important to the Centre, for the most important of the parties, including the National Conference, has refused to do so unless statehood was restored. It still might not. Party president Omar Abdullah said after the meeting that there was no need for delimitation only for Jammu and Kashmir. But said that he was optimistic.

Of course, the Prime Minister heard the Kashmiri politicians’ demands not only for elections, but full statehood, and the restoration of special constitutional provisions too. The restoration of statehood was already promised when the place was converted into two Union Territories in August 2019, but he gave no indication about when this might happen.

As for the special constitutional provisions, they are clearly off the table, except that the government continues to politely listen to demands for their restoration. That the matter is in court was cited as a reason for the government to keep its counsel on the abrogation of Article 370.

Several parties were at the meeting, but the focus was mainly on two: the National Conference and the People’s Democratic Party. Each has won the largest number of seats in at least one assembly general election in the erstwhile state.

The Centre wants to get both to participate in the delimitation process, to legitimise it, and pave the way for broad public participation in elections. There are indications that the government has given covert commitments abroad on the restoration of democracy in the erstwhile state.

No doubt that is why it reached out to the state’s established political parties—whom it had mocked dismissively as dynastic, corrupt, and worse. No less than Home Minister Amit Shah referred to them as the `Gupkar Gang’ as recently as last November.

Some of these parties, on the other hand, have climbed down more steeply—to attend, and to keep the talks cordial over the three-plus hours of discussion, if not also go along with the delimitation process, at least tacitly.

Perhaps the most crucial attendee was PDP chief Mehbooba Mufti, for she is almost the only one who has strongly protested rights and political issues in the recent past—although even she has been less strident than in the past.

She had said in July 2017 that no one in the state would even help to bury the Indian flag in Kashmir if Article 370 were done away with. She has had little option but to fall in line now, since there has been relatively little ground-level reaction to the constitutional changes—and none to the locking up of established politicians for many months.

The NC, particularly party President Omar Abdullah, has been muted. The party’s patron, Farooq Abdullah was given notice some months ago that his property would be confiscated in connection with a corruption case against him.

For a while, the Centre seemed intent on propping up small, new parties, and a large new one. The small ones made no headway. The large one did, but not sufficiently to seem like a winner in an electoral contest with these established ones.

Part of the reason why the government has now reached out to the established parties is that the international scenario has turned inimical—something I had predicted on the very day the constitutional changes were made (please hyperlink: https://www.firstpost.com/india/rise-in-pan-islamist-militancy-in-kashmir-possible-taliban-rule-in-afghanistan-bjp-couldnt-have-picked-a-worse-time-to-scrap-article-370-35a-7112921.html). The most obvious factor is the Chinese intrusion into Ladakh. China specifically cited the reorganisation of the state as a reason.

It also joined Pakistan to take up the issue at the UN General Assembly and Security Council very soon after the reorganisation of the erstwhile state.

On the other hand, the Democratic Party, now in power in the US, is likely to be far more sharply focused on rights, and less sympathetic to India’s case with regard to the erstwhile state.

There is also the Afghan factor: the current withdrawal of Western forces from there could turn the attention of the Taliban towards Kashmir. 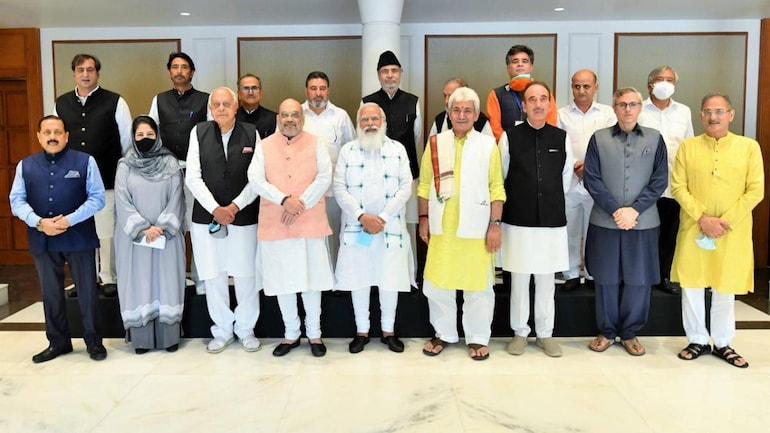