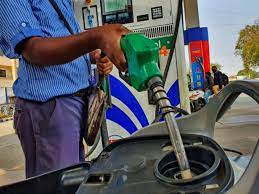 New Delhi, Jun 24: Petrol price in Chennai neared the Rs 99-a-litre mark on Thursday after fuel prices were increased again on firming international oil rates.
The price of petrol was hiked by 26 paise per litre and that of diesel by 27 paise a litre, according to a price notification of state-owned fuel retailers.
The increase took rates across the country to fresh highs.
In Delhi, petrol hit an all-time high of Rs 97.76 a litre, while diesel is now priced at Rs 88.30 per litre.
Fuel prices differ from state to state depending on the incidence of local taxes such as value-added tax (VAT) and freight charges.
And, for this reason, petrol has crossed the Rs 100-a-litre mark in nine states and Union territories — Rajasthan, Madhya Pradesh, Maharashtra, Andhra Pradesh, Telangana, Karnataka, Jammu and Kashmir, Odisha, and Ladakh.
Among metro cities, petrol is already above Rs 100 in Mumbai, Hyderabad and Bengaluru. And now rates are inching closer to that mark in Chennai.
Petrol in Chennai now costs Rs 98.88 per litre. Diesel in the city is priced at Rs 92.89 a litre.
In Mumbai, petrol now costs Rs 103.89 a litre and diesel comes for Rs 95.79.
Rates of diesel, the most used fuel in the country, had crossed the Rs 100-a-litre mark in Sri Ganganagar and Hanumangarh in Rajasthan earlier this month. Now, they have crossed the same mark in a couple of places in Odisha.
The hike on Thursday is the 29th increase in prices since May 4, when state-owned oil firms ended an 18-day hiatus in rate revision they observed during assembly elections in states like West Bengal.
In 29 hikes, the price of petrol has risen by Rs 7.36 per litre and diesel by Rs 7.77 a litre.
Oil companies revise rates of petrol and diesel daily based on the average price of benchmark fuel in the international market in the preceding 15 days, and foreign exchange rates.
International oil prices have firmed up in recent weeks in anticipation of demand recovery following the rollout of vaccination programmes by various countries.
Oil prices climbed on Thursday after a sharp drawdown in US stocks reinforced optimism of a quick recovery in fuel demand and on doubts about the future of the 2015 Iran nuclear deal that could end US sanctions on Iranian crude exports.
Brent crude soared past the USD 75 per barrel mark, the first time since April 2019.
Also, the rupee has weakened against the US dollar, making imports costlier. (PTI)