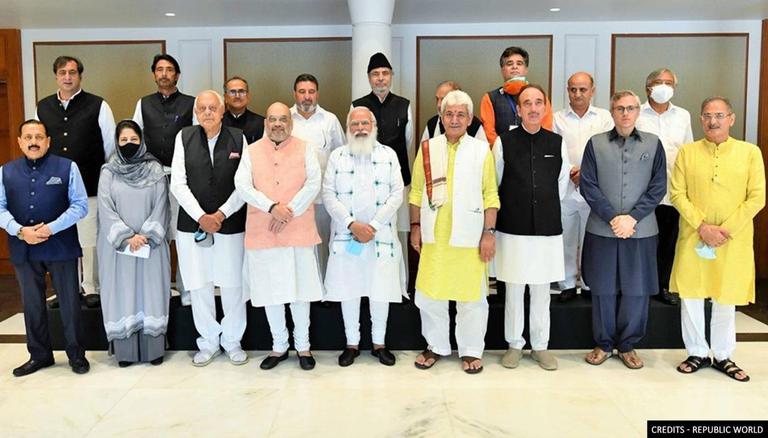 In contrast to Mehbooba Mufti’s stern and unwavering resolve to restore Article 370, which she claims to have expressed uncompromisingly at the meeting with Prime Minister Narendra Modi alongside her fellow Jammu & Kashmir politicians on Thursday, in reality, the PDP chief only raied the matter obliquely, sources have informed Republic. Former J&K Chief Minister Omar Abdullah did not raise Article 370 in the meeting either, sources added. Sajad Lone and Ghulam Nabi Azad, both in attendance, while speaking to media after the meeting, also affirmed that the matter of Article 370 was not discussed as it remains sub-judice with the case pending before the Supreme Court.

Inside sources report that Mehbooba Mufti did not mention Pakistan during the duration of the meeting as well while she claimed that she called for talks with Islamabad to restart train services between the two countries. On the issue of Pakistan, Sajad Lone said that it is to be dealt by the Ministry of External Affairs whereas Congress’ representative Ghulam Nabi Azad had a ‘statesmanly’ approach throughout the key meeting even as he placed five demands before the Centre, sources informed.

As per Azad, there were no restrictions in the meeting and representatives were allowed to bring up any issue and speak freely without any time constraint. Divulging details of the meeting to the media, Azad asserted that all parties univocally demanded a ‘full-fledged restoration’ of statehood. He also remarked that the Prime Minister said that he wanted to hold such a meeting earlier but was forced to delay it due to the COVID-19 pandemic. Moreover, Azad revealed that both, the Prime Minister and Home Minister, promised that elections will be held once the delimitation process is completed and statehood will be restored.

What did Mufti say at the meeting with PM Modi? As per her own account…

Issuing her first statement following Prime Minister Narendra Modi’s meeting with mainstream Jammu & Kashmir political parties, PDP chief Mehbooba Mufti said that she expressed the feelings of the people of J&K at the 3.5-hour-long meet on Thursday. The former Chief Minister said that the people of Jammu & Kashmir are angry and upset after Article 370 was abrogated by the Centre in an ‘unconstitutional, illegal and immoral’ manner. Mufti reiterated that the government should hold discussions with Pakistan to restore train services between the two countries, which had been a source of employment for many.

In a stern tone, while addressing media persons after the meeting, Mufti remarked that the people of J&K will struggle to restore Article 370 even if takes months or years, adding that the special provisions weren’t given by Pakistan, but by ‘J&K’s own country, Jawaharlal Nehru and Vallabbhai Patel’. Significantly, Mufti claimed that she demanded an economic package for the people of J&K who have sustained financial losses due to the abrogation of Article 370, and that all political prisoners should be released.

Meanwhile, Prime Minister Narendra Modi, in a tweet after the meeting, said that the Centre is committed to ensuring all-round development of J&K. He asserted that Indian democracy’s biggest strength is the ability to sit across a table and exchange views. As per sources, the PM in the meeting, also said that he aims at removing ‘Dilli ki Duri’ along with ‘Dil ki Duri’

“I told the leaders of J&K that it is the people, specially the youth who have to provide political leadership to J&K, and ensure their aspirations are duly fulfilled,” PM Modi tweeted. Similarly, Home Minister Amit Shah said that the future of Jammu and Kashmir was discussed and the delimitation exercise and peaceful elections are important milestones in restoring statehood as promised in the Parliament.