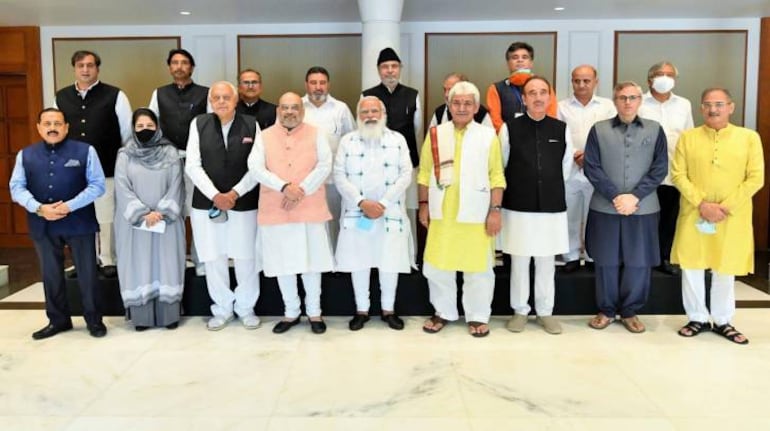 The meeting was held at the Prime Minister’s official residence, 7 Kalyan Marg in New Delhi

Prime Minister Narendra Modi on June 24 chaired a meeting of political leaders from the Union Territory of Jammu and Kashmir – first and crucial step aimed at resuming the political process in the UT, 22 months after the abrogation of Article 370 that granted special status to the erstwhile state.

This meeting, that lasted more than three-and-a-half hours, discussed delimitation, election and restoration of statehood for Jammu and Kashmir, according to the leaders who were present at the meeting that was held at the Prime Minister’s official residence, 7 Kalyan Marg in New Delhi.

This meeting is expected to pave way for holding assembly elections in Jammu and Kashmir, ending the Central rule imposed in the erstwhile state in June 2018.

READ: PM Modi meets J&K leaders today; Who all are attending and what to expect?

Many leaders who attended the meeting said that it was a cordial, positive and dignified engagement.

“We were all in agreement that we must work together for the democracy and  development of Jammu and Kashmir,” Muzaffar Hussain Baig, former Deputy Chief Minister of Jammu and Kashmir and Peoples Conference leader said after the meeting.  His party colleague and Peoples Conference chief, Sajad Gani Lone said there was a cordial and emotional bonding during the engagement.

Congress leader and former Chief Minister Ghulam Nabi Azad said his party representatives put forward five demands in the meeting. He said that party demanded restoring statehood, conducting assembly elections, job and land guarantee for people of Jammu and Kashmir, ensuring return of Kashmiri Pandits and release of political prisoners who were arrested before and after abrogation of Article 370 in August 2019.

“It was an open discussion. The government listened to us,” Azad said.

The meeting, sources said, started with introductory remarks by Minister of Home for the Prime Minister’s Office, Jitendra Singh. A presentation informing about the developmental initiatives was also made during the meeting followed by remarks by the Home Minister Prime Minister and the other leaders from Jammu and Kashmir.

Four former Chief Ministers of the erstwhile state, Dr Farooq Abdullah and Omar Abdullah of the National Conference (NC), Mehbooba Mufti of the People’s Democratic Party (PDP) and Ghulam Nabi Azad of the Congress were present at the meeting. The NC and the PDP are part of the PAGD. MY Tarigami of the CPI (M), another PAGD constituent, was also present.

Also, read: Explained | Delimitation in J&K: Here’s all you need to know about the exercise

The meeting of the leaders is being seen as a giant leap towards restoration of electoral process in Jammu and Kashmir, especially since three of the former chief ministers Farooq Abdullah, his son Omar Abdullah and Mehbooba Mufti, who attended the meeting, were kept in detention for months from August 4, 2019 – a day before the Centre stripped Jammu and Kashmir of special status and bifurcated it into two Union Territories.

While Farooq Abdullah was detained for seven  months, his son Omar Abdullah was kept under detention for eight months. Mehbooba Mufti was released 14 months after detention.

Also, read : ‘Restoration of Article 370’, ‘full statehood’ and a ‘new social contract’ ; Here’s what political leaders from J&K will demand at the meeting with PM Modi

Earlier, while PAGD leaders said that they stand by the alliance’s demand seeking restoration of Article 370, assembly election and full statehood for Jammu and Kashmir, they said they attended the meeting with an open mind. The leaders representing Congress, the Apni party and the Panther’s party from Jammu said they will seek restoration of statehood to Jammu and Kashmir at the meeting.

Sources said that the government is clear that there will be no going back on the removal of Article 370 and while statehood, was discussed. They said the idea behind reaching out to the political parties of Jammu and Kashmir was to seek their cooperation on the delimitation exercise underway in the UT.

What remains to be seen, however, is how the political parties would want to move forward from here while engaging with the Centre as the electoral process is resuming in the Union Territory. Source