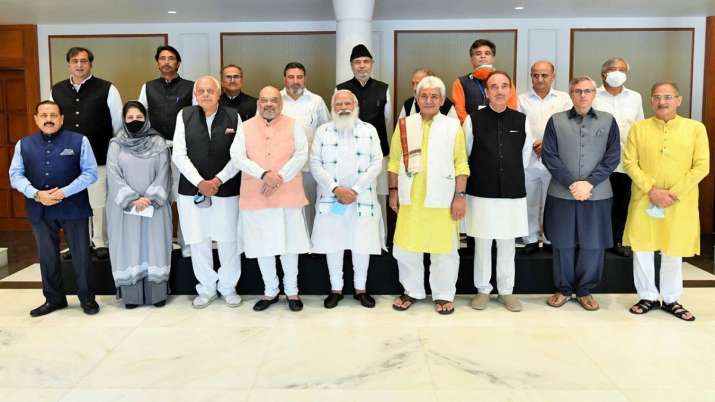 Prime Minister Narendra Modi is chairing an all-party meeting with the leaders of Jammu and Kashmir today. A total of 14 leaders, including National Conference leader Farooq Abdullah, PDP chief Mehbooba Mufti, People’s Conference leader Sajad Lone and Muzaffar Hussain Baig and Apni Party leader Altaf Bukhari, are attending the meet at the Prime Minister’s residence in Delhi. BJP J&K unit leaders Kavinder Gupta, Nirmal Singh, and Ravinder Singh, and Bhim Singh from J&K Panthers are also attending today’s meet. This is the first meeting between PM Modi and the leaders of J&K since the Centre scrapped Jammu and Kashmir’s special status and bifurcated it into two Union Territories in August 2019.

PM Modi-J&K leaders meeting LIVE: I will speak in the meeting first and then interact with you all, Farooq Abdullah tells reporters before walking for the all-party meeting. “She is the president of her party, has every right to speak what she feels. Why should I comment,” Abdullah said when asked about Mehbooba Mufti’s ‘talk with Pakistan too’ remark.

PM Modi-J&K leaders meeting LIVE: The all-party meeting is scheduled to begin at 3 PM and PM Modi is likely to arrive by 3:10 PM. Coconut water, tea etc will be provided to leaders as refreshments after which there will be a photo session of the leaders with PM Modi and Home Minister Amit Shah, sources said. National Conference leader Farooq Abdullah is likely to speak first following which other leaders will present their views in the meeting one by one. Home Minister Amit Shah will address the leaders after they finish speaking. PM Modi is also likely to speak during the meeting before it concludes, reports India TV’s Devendra Parashar.

PM Modi-J&K leaders meeting LIVE: Our expectations are that it should be a good beginning to resolve the issues, concerns of the people of Jammu and Kashmir and Ladakh. Whatever has been done to us is not within the limits of the Constitution, says CPI-M leader Yousuf Tarigami ahead of all-party meeting with PM Modi. “Our rights guaranteed under the provisions of the Constitution of India have been snatched from us. We will demand the government and PM to reconsider and restore those rights which have been guaranteed by the Constituent Assembly of India,” Tarigami added.

J&K all-party meeting LIVE: BJP leader and former Jammu and Kashmir deputy CM Kavinder Gupta has said that the party will put forth the issues concerning the people of the region in the meeting with PM Modi. We want people of both Jammu and Kashmir should treated equally if there is any decision regarding delimitation, Gupta told India TV.

J&K all-party meeting LIVE: Congress says it will raise the issue of statehood for Jammu and Kashmir in the meeting with PM Modi. “We are going to raise the state issue. People in the state are shocked after the developments in 2019. We’ll wait for Prime Minister Narendra Modi’s agenda for today’s meeting and respond accordingly,” Jammu and Kashmir Congress chief Ghulam Ahmad Mir said.

All-party meet LIVE: Prime Minister Narendra Modi is currently meeting Union Home Minister Amit Shah. The meeting is underway at the PM’s residence where an all-party with Jammu and Kashmir leaders will take place. The meeting will begin at 3 PM. Shah will also attend the meeting.

J&K all-party meet LIVE: Bhim Singh, Jammu and Kashmir National Panthers Party’s president, said, “I am here as I’m invited (to join the All-Party Meeting called by Prime Minister Narendra Modi). The statehood of Jammu and Kashmir should be restored.”

Congress to attend PM Modi’s J-K all party meeting:  The Congress party has decided to attend the all-party meeting convened by Prime Minister Narendra Modi in New Delhi, with its leader GA Mir asserting that the restoration of full statehood of Jammu and Kashmir will be its “priority number one”. READ MORE

Dogra Front stages protest against Peoples Democratic Party chief Mehbooba Mufti in Jammu. “This protest is against Mufti’s statement which she gave after Gupkar meeting that Pakistan is a stakeholder in Kashmir issue. She should be put behind bars,” says a protester.

All-party meet at 3 PM: Prime Minister Narendra Modi’s all-party meet with Jammu and Kashmir leaders will begin at 3 pm at his official residence in Delhi.

All-party meet LIVE: The Jammu and Kashmir administration has sounded a high alert for the next 48 hours in the UT and suspended mobile internet services. Areas along the Line of Control have also been put on high alert.

J&K all-party meet: National Conference leader Farooq Abdullah has left for Delhi from Srinagar. He will reach here y 11 AM.

Union Home Secretary Ajay Bhalla is said to have reached out to J&K leaders for the meeting. Reports say that the Centre reached out to politicians to discuss the delimitation exercise in the Union Territory. According to multiple media reports, polls in Jammu and Kashmir could take place in November this year or early next year.

J&K’s statehood to be restored ?

New Delhi has also dropped enough hints about J&K’s statehood being restored soon and the Assembly elections can be held in 2022, soon after the delimitation exercise in the Union Territory is completed. The ball is in the court of the traditional politicians of the Valley now. They have to decide what they want, do they want to remain stranded in the past or want to move on.

Since the day Kashmiri leaders have received the invitation from New Delhi, they have been upbeat and look keen to attend the all-party meeting. If all goes well, a new beginning for them is on the cards and the ice is all set to melt.

READ MORE: ‘PM should talk to Pakistan too’: Mehbooba Mufti ahead of all-party meet on Kashmir