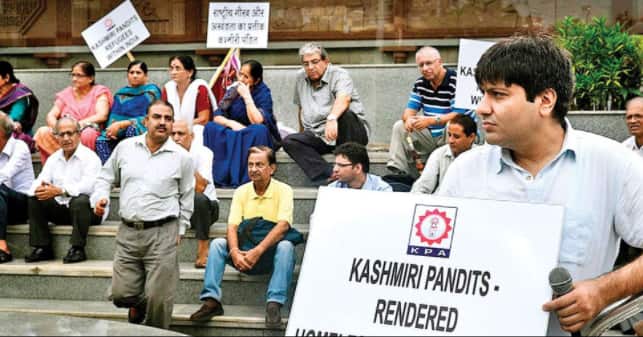 New Delhi: As Prime Minister Narendra Modi is all set to hold the first high-level interaction with political leadership from Jammu and Kashmir, the exiled community of Kashmiri Pandits has demanded their political representation in the J&K Assembly.

Notably, as many as 14 prominent leaders from Jammu and Kashmir are scheduled to attend the meeting with Prime Minister on Thursday. This is the first high-level interaction between the Centre and political leadership mainly from Kashmir since August 5, 2019, when the Modi government revoked the special status of Jammu and Kashmir and the state was bifurcated into two union territories.

The exiled community of Kashmiri Pandits, who have been in exile ever since the sudden rise in terrorism and targeted assassination against them since 1990, have sought an audience from the Prime Minister to demand reservation of seats for the community after the delimitation process in the newly constituted J&K Assembly.

The community has also expressed their disappointment at not being invited for the all-party meeting with the Prime Minister. In an open letter to PM Modi, Kashmiri Pandit group Panun Kashmir has sought answers to why the government has ignored the community.

In the open letter, available in media reports, Panun Kashmir convener Dr Agnishekhar wrote, “The previous UPA government had taken our opinion by inviting us to three round table conferences, no matter what the result was. Not only this, as the convener of Panun Kashmir, I have taken a delegation to meet former Prime Minister Atal Bihari Vajpayee five times when he was in office.”

The GKPD leaders urged the government to invite them also for a similar meeting to give them the opportunity to discuss their political and civilizational aspirations for a dignified return to their homeland.

According to sources, there is no fixed agenda for the meeting and a freewheeling discussion is expected, but delimitation, statehood, and assembly elections are expected to remain the key issues for discussion.