Has Centre admitted that stripping Article 370, bifurcating J&K was a mistake?

PM Narendra Modi, led a 3-hour meeting with leaders of Jammu and Kashmir, however removing “Dilli ki Doori as well as Dil Ki Doori” seems a long way off 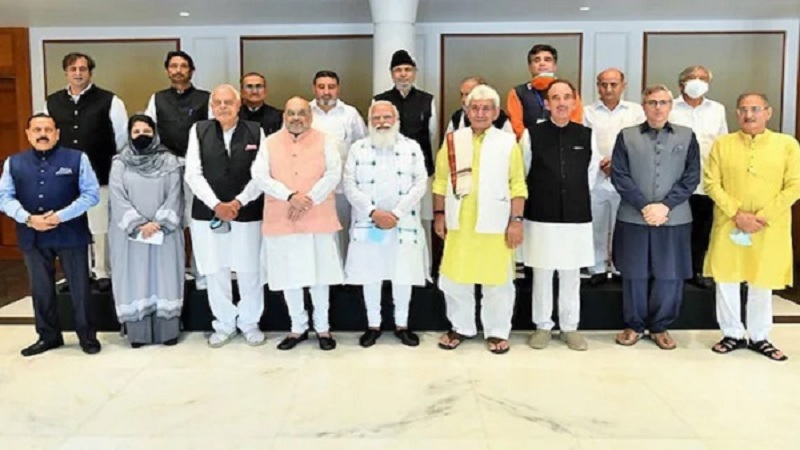 “The Gupkar Gang is going global! They want foreign forces to intervene in Jammu and Kashmir. The Gupkar Gang also insults India’s Tricolour…”  Union Home Minister Amit Shah had posted on Twitter in November 2020. He lashed out at the People’s Alliance for Gupkar Declaration (PAGD), a coalition of political parties in Jammu and Kashmir, which had come together to demand restoration of Article 370. Most of these leaders had also been detained, arrested under the Public Safety Act for nearly a year. The Home Minister’s words are still in the public domain.

The Gupkar Gang is going global! They want foreign forces to intervene in Jammu and Kashmir. The Gupkar Gang also insults India’s Tricolour. Do Sonia Ji and Rahul Ji support such moves of the Gupkar Gang ? They should make their stand crystal clear to the people of India.

On Thursday, Shah, stood with Prime Minister Narendra Modi as he posed for a group photo with the same ‘Gupkar gang.’ Lieutenant Governor, Jammu and Kashmir,  Manoj Sinha, NSA, Ajit Doval, Minister of State (PMO) Jitendra Singh and senior officials also attended the meeting along with political leaders. “Our democracy’s biggest strength is the ability to sit across a table and exchange views,” said the Prime Minister after his 3-hour meeting with leaders of Jammu and Kashmir, aimed at removing “Dilli ki Doori as well as Dil Ki Doori”.

Our democracy’s biggest strength is the ability to sit across a table and exchange views. I told the leaders of J&K that it is the people, specially the youth who have to provide political leadership to J&K, and ensure their aspirations are duly fulfilled. pic.twitter.com/t743b0Su4L

Shah who had once called the Gupkar Alliance an “unholy global gathbandhan” accusing it and the Congress of wanting to “take J&K back to the era of terror and turmoil,” echoed the PM on Thursday, saying “peaceful elections are important milestones in restoring statehood as promised in parliament.”

Today’s meeting on Jammu and Kashmir was conducted in a very cordial environment. Everyone expressed their commitment to democracy and the constitution. It was stressed to strengthen the democratic process in Jammu and Kashmir. pic.twitter.com/oa6ZYQVz9J

Attending the meeting on invite from the Centre were J&K politicians Farooq Abdullah, Ghulam Nabi Azad, Mehbooba Mufti, Omar Abdullah, Kavinder Gupta, Muzaffar Hussain Baig, Nirmal Singh, Tara Chand, Mohd Altaf Bukhari, Sajad Gani Lone, Ravinder Raina, Gulam Ahmed Mir, Mohd Yousuf Tarigami and Bhim Singh. As expected most leaders told the media after the over three-hour meeting that the discussions were “cordial” and that the PM heard them out. No one shared if there was a roadmap in place for the restoration of statehood of Jammu and Kashmir. Was Ladakh, which was designated as a Union Territory, discussed at all? It has not been mentioned in any post-meeting comments so far. This meeting was focused on J&K only.

The J&K leaders’ mood too was a far cry from the days when many of them were released after the year long detention. The former chief ministers Mehbooba Mufti, Farooq Abdullah and Omar Abdullah, had all been detained under the Public Safety Act (PSA) in 2019 since the abrogation of Article 370 on August 5 that year. The PSA allows the government to detain a person for upto two years without a trial. Farooq Abdullah was released in March 2020, a few weeks after that his son Omar Abdullah, was also released from a long detention. Months after that, former Chief Minister of Jammu and Kashmir Mehbooba Mufti was released too. She had been detained for around 14 months. She had then released an audio message on Twitter and said, “People of Jammu and Kashmir cannot forget the “robbery and humiliation” of August 5.”

It was in March 2021 that the Supreme Court  had said that “Expression of dissent not seditious” and dismissed a plea seeking action against former Jammu and Kashmir Chief Minister Farooq Abdullah over his views about the abrogation of Article 370 of the Constitution and withdrawal of special status of the valley. The SC  Bench comprising Justices Sanjay Kishan Kaul and Hemant Gupta opined, “Expression of views which are dissent and different from government opinion cannot be termed as seditious.” In 2020 Farooq Abdullah had been slammed by Bharatiya Janata Party (BJP) spokesperson Sambit Patra who called the veteran polticians’s comments about Article 370 abrogation “seditious and anti-India.” On June 24 2021, Patra was on a television channel sharing carefully worked opinions on the abrogation of Article 370 even as Prime Minister Narendra Modi was meeting with the political leaders from Jammu and Kashmir.

On June 24 2021, post meeting ‘statements’ given by the politicians whose words  were once labeled seditious have all been diplomatic and guarded.

What’s the People’s Alliance for Gupkar Declaration planning next?

The leaders once released from detention had come together with other regional leaders to form the People’s Alliance for Gupkar Declaration (PAGD). The Alliance of National Conference, PDP, BJP, Congress, and others proved its credentials with a big win in the District Development Council (DDC) polls, indicating a changing political opinions of the voters. According to the former Chief Minister Mehbooba Mufti, the DDC results have also “made it clear that people of J&K rejected the unconstitutional decision to abrogate Article 370.” In February 2021, in response to a question raised by MP Ripun Bora and MP Priyanka Chaturvedi in Rajya Sabha, the Ministry of Home Affairs stated that out of 613 persons detained since August 1, 2019 under the Public Safety Act (PSA), 430 have been released so far.

These are essential facts to consider, as they have now been seen as ‘people’s representatives’ by the Centre, for the first time since the alliance came into being. They may have not really been smiling in the group photo with the PM and HM, but the optics of the meeting on Thursday are interesting. According to news reports, security in the UT was reportedly tightened even as the leaders were on their way to Delhi to meet the PM at his residence. All day the media reported how ‘there was no specific agenda” for the meeting. However, for the leaders from the UT, the agenda has been clear from the day they came together to form the coalition: agenda is very clear — Jammu and Kashmir, the decision taken by the Prime Minister on August 5 and restoration of statehood.

“We kept 5 demands in the meeting- grant statehood soon, conduct Assembly elections to restore democracy, rehabilitation of Kashmiri Pandits in J&K, all political detainees should be released and on domicile rules,” said Congress leader Ghulam Nabi Azad after the meeting. People’s Conference leader Sajjad Lone told the media:  “The meeting was held in a very cordial manner. We came out quite positive..”. People’s Conference Party’s Muzaffar Baig added that the “PM listened carefully, and all parties in agreement over J&K development.”

National Conference leader Omar Abdullah told The Indian Express that the meeting was “a first step in the right direction”. He added, “The Central government is keen to restore an elected government in Jammu and Kashmir at the earliest. The Prime Minister has talked about an early delimitation process. That means they are looking at following that up with Assembly elections”. The National Conference and other parties had challenged the August 5 decision and the delimitation exercise before the Supreme Court. On Thursday the PM said, “Our priority is to strengthen grassroots democracy in J&K. Delimitation has to happen at a quick pace so that polls can happen and J&K gets an elected Government that gives strength to J&K’s development trajectory.”

There seems to have been no discussion on article 370 at the meeting, if the post meeting statements are to be considered. However, former CM Mehbooba Mufti told NDTV, “People of J&K are in pain since 5 August 2019. They are angry and feel humiliated. The people of J&K do not accept the unconstitutional abrogation of Article 370.” Instead, Prime Minister Narendra Modi, in the 3-hour meeting with political leaders of Jammu and Kashmir on Thursday, reportedly spoke about removing “Dilli ki Doori as well as Dil Ki Doori” and assured his commitment to restoring full statehood at the right time. According to news reports, PM Modi said J&K’s statehood would be restored “at an appropriate time” and asked the political parties to get on board with delimitation or the redrawing of assembly constituencies to enable elections. Meanwhile, Mehbooba Mufti, one of the two who continued to wear the facemask in keeping with Covid-19 protocol as seen in photos, said, “We will struggle for 370, be it months or years. We didn’t get this (special status) from Pakistan, but from India, Nehru. There can be no compromise on this.”