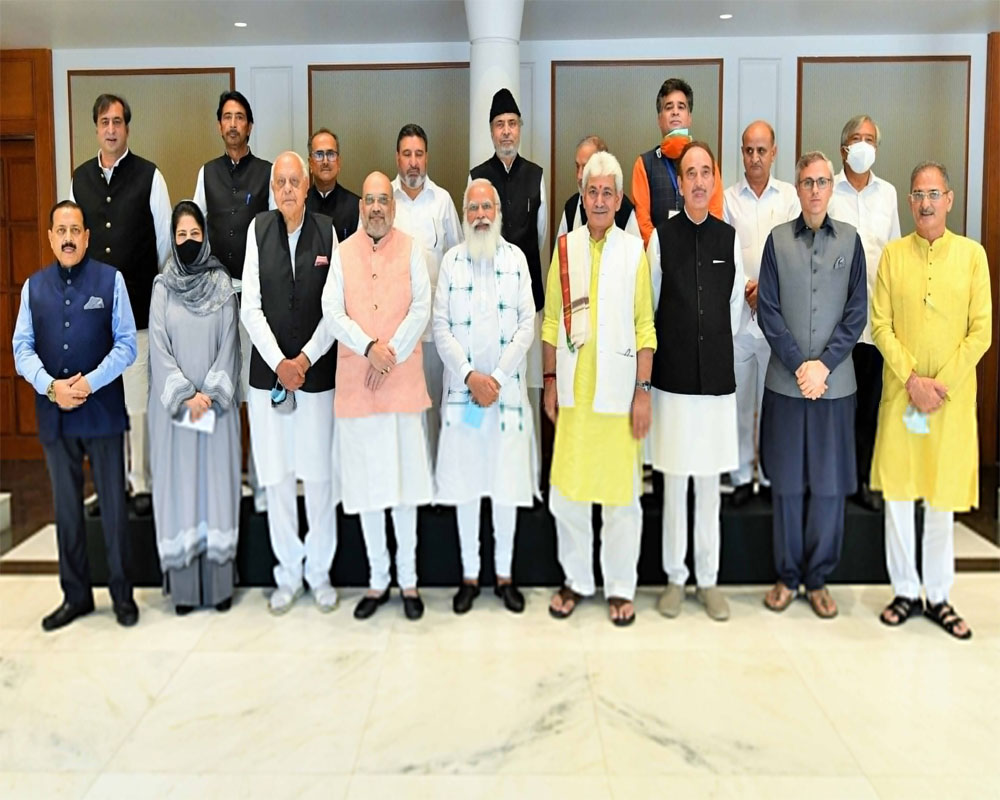 Prime Minister Narendra Modi on Thursday assured the key political voices from Jammu & Kashmir that the Centre was committed to holding elections “soon after the completion of the ongoing delimitation process” even as most of the leaders demanded restoration of the statehood and slammed scrapping of Article 370.

Talking after the meeting, Union Home Minister Amit Shah said the Centre was committed to granting statehood to the J&K.

“We are committed to ensure all round development of J&K. The future of J&K was discussed and the delimitation exercise and peaceful elections are important milestones in restoring statehood as promised in Parliament,” Shah tweeted soon after the meeting.

Modi stressed in the meeting that holding Assembly elections, just like the “successful conduct” of the District Development Council polls, is a “priority” and that the polls can happen soon after the delimitation exercise.

According to sources, Modi assured statehood but sought cooperation from parties on the delimitation exercise. People Democratic Party president Mehbooba Mufti had reservations towards the delimitation process.

The demand for the restoration of Article 370 was raised by the main leaders of Peoples Alliance for Gupkar  Declaration (PAGD), but it  was rejected by Modi saying the step has brought forth peace and reduced corruption in the erstwhile State.

The PM stressed that an atmosphere of safety and security needs to be ensured for all sections of society in J&K.

Modi said he wanted to remove “Dilli ki Duri” as well as “Dil Ki Duri” (distance from Delhi as well as distance of heart) and that wanted to call this meet last year itself but the Covid-19 pandemic did not allow it.

National Conference (NC) leader Omar Abdullah said “it was a good beginning” though he said it was “pointless to expect the Modi Government to restore Article 370.”

Abdullah said it took the BJP 70 years to take away Article 370 but “we will take it back in time. We are for a long haul”.

Asked by a television channel on how it was sitting with the Home Minister who called them as “Gupkar gang”, Abdullah quipped saying he did not say so in the meeting and listened to all patiently.

He said all the leaders left no stone unturned in telling PM what they felt after what happened following removal of article 370.

On Mufti’s comment “if Taliban can be talked to why not Pakistan”, Abdullah said he understands that “back channel talks are already on, no body denied it…and it is good”, he said.

According to Congress leader Gulam Nabi Azad who represented his party along with the PCC president Gulam Ahmed Mir and former Deputy-Chief Minister Tarachand in the meeting, Prime Minister and Union Home Minister committed themselves to granting statehood to J & K.

Azad said his party had put forward five demands including that of statehood, Assembly polls, domicile rights on land and employment, rehabilitation of Kashmiri pandits and setting free of all political prisoners.

Mufti who had this week sought Government should speak to Pakistan too and thus triggering protests in Jammu, described the meeting as “positive”.

People’s Conference (PC) Muzaffar Baig said it was a “dignified meeting and PM listened to carefully”. Sajjad Lone of PC also described it as “very cordial meet and with emotional bonding given what happened in last two years”.

The first meeting convened by the Prime Minister on Jammu and Kashmir after the abrogation of Article 370 on August 5, 2019, deliberated for three and half hours process of restoring “democratic process” and elections  in J & K and  delimitation process at Prime Minister’s residence at 7, Lok Nayak Marg.

The Centre has set-up Delimitation Commission under ex-Supreme Court Justice Ranjana Prakash Desai who is currently working on the delimitation of LS and MLA  Assembly segments in J & K with an extension of one year in account of slowing down of work due to Covid19. The new delimitation is expected to allocate more seats to the Jammu region. The last delimitation was done in1995.

Indicating fissures in the Gupkar Alliance,  Farooq Abdullah said before the meeting that the PDP leader is following her party’s agenda and he is following his own track. He said this when asked to comment on Mufti’s comment that Pakistan should also be talked to by the government of India.

“Mehbooba ji is the president of her party. She has the right to speak. I have my own. I don’t want to bring in Pakistan. I am going to talk to our own prime minister”, said Abdullah apparently not inclined to create any discordant any note before the meet