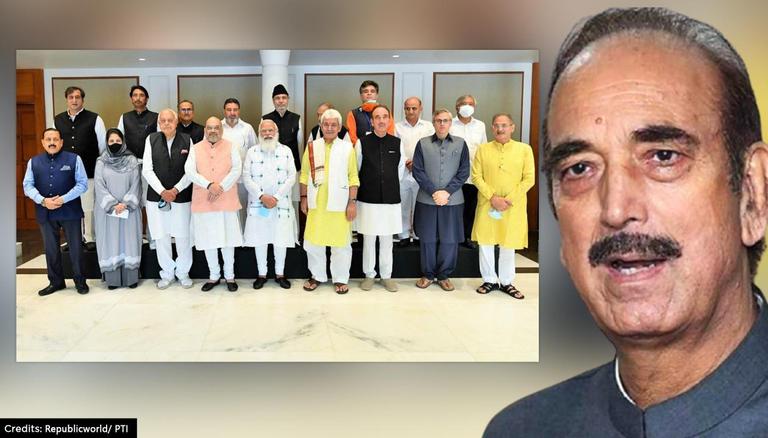 Walking out of 7 Lok Kalyan Marg after a 3.5-hours-meeting with Prime Minister Narendra Modi alongside mainstream Jammu & Kashmir political parties, former Rajya Sabha MP Ghulam Nabi Azad said that the Congress has placed five demands before the Centre. Azad, who was aided by his Congress companions Ghulam Ahmed Mir and Tara Chand, said that the meeting took place in a conducive environment and that there was no hostility. Azad also revealed that there were no restrictions in the meeting and representatives were allowed to bring up any issue and speak freely without any time constraint.

Divulging details of the five demands placed by Congress, Ghulam Nabi Azad said that restoration of statehood is first and foremost. The second demand is to conduct elections to the legislative assembly as the environment is now conducive, considering the ceasefire at LoC and the smooth conduct of DDC polls. The third demand, he said, was to restore domicile laws held by citizens of Jammu & Kashmir and the fourth is that the Centre should assist the return of Kashmiri Pandits to the valley, who have been in exile for over 30 years now. The fifth Congress demand is that political prisoners detained in the aftermath of abrogation of Article 370 should be released.

“In the meeting today, we put forth the views of Congress. We objected to the dissolvement of J&K statehood which was done without consulting state representatives. In the end, after everything was presented, we placed five big demands. One statehood should be restored. We highlighted that the PM and HM had assured in Parliament to restore statehood and we pointed out that the environment was conducive with the ceasefire with Pakistan and elections of councils,” said Ghulam Nabi Azad while speaking to media persons, flanked by his two Congress aides at the meeting.

Azad, who was once the Chief Minister of Jammu & Kashmir, said that most representatives agreed that since the abrogation of Article 370 was sub-judice and before the Supreme Court, it should not be discussed. He asserted that all parties univocally demanded a ‘full-fledged restoration’ of statehood. Azad also remarked that the Prime Minister said that he wanted to hold such a meeting earlier but was forced to delay it due to the COVID-19 pandemic. Moreover, Azad revealed that both, the Prime Minister and Home Minister, promised that elections will be held once the delimitation process is completed and statehood will be restored.

When asked if he was satisfied with the meeting, Ghulam Nabi Azad said, “I will be satisfied when elections are done and statehood returns.”