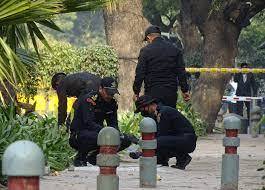 Four men from a remote area in northern India have been detained and brought to the capital New Delhi by police over a bomb blast earlier this year outside the Israeli embassy, officials and reports said Thursday.

The January 29 explosion occurred as Israel marked the anniversary of its establishment of diplomatic relations with India.

No injuries were reported but the windows of three cars were blown out, with Israeli officials in Jerusalem calling the episode a terrorist attack.

“In a joint operation with a central intelligence agency and Kargil Police, the special cell of Delhi Police has detained four persons from Kargil in connection with conspiracy to plan and execute terror activities in the national capital,” Delhi Police said in a statement.

“They have been taken on remand and brought to Delhi for questioning.”

Police added that the men, aged between 25 and 28, are from the village of Thang in India’s Kargil district, which is located in the Himalayan territory of Ladakh.

The four are students and are suspected of being linked to the blast outside the embassy, local media reported.

Indian media reported at the time that investigators had found an envelope with a letter addressed to the Israeli ambassador in the street.

Since establishing relations 29 years ago, India and Israel have become close and India is now one of the biggest buyers of Israeli weapons and defense equipment.