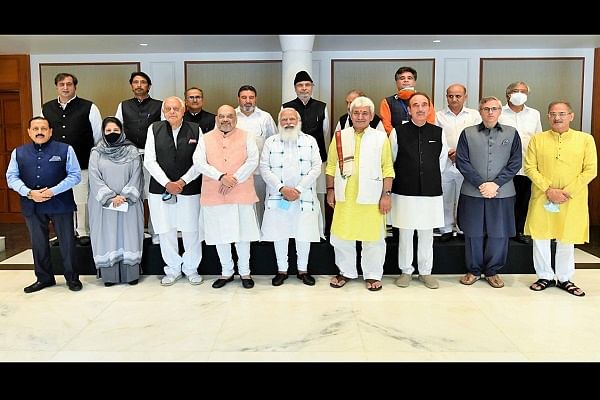 The Gupkar alliance is an amalgam of five political parties — the NC, the PDP, the CPI(M), the Awami National Conference (ANC) and the J&K Peoples Movement —seeking pre-August 5 status restoration for Jammu and Kashmir (J&K).

The alliance leaders responded positively on 22 June to the invitation from the Union Home Secretary to meet the prime minister.

The purported goal of the all party meeting today was to settle a “political equilibrium” with regard to the union territory (UT). The meeting comes almost two years after the parliament ended the special status of J&K, and made Ladakh a separate UT. It was held at PM’s official residence, 7, Lok Kalyan Marg.

“We have received an invitation from the PM. We are going to attend the all-party meeting. We will place our stand before the PM and Union Home Minister. Later, we will apprise the people about the outcome. Our stand remains the same,” Peoples Alliance for the Gupkar Declaration (PAGD) president Farooq Abdullah was quoted as saying by The Hindu. The decision was taken after a meeting of the PAGD chaired by Abdullah at his residence.

The report quoted a source as saying that the meeting materialised only after the Prime Minister’s Office (PMO) dropped the pre-conditions and redlines, which would be open-ended.

“Neither delimitation nor early elections nor Statehood will be the agenda of talks. It then limits the scope of dialogue and engagement,” the source stated.

Ahead of the meeting, Mufti, who was said to have been reluctant to attend, told the media that she would be raising the issue of political prisoners.

“New Delhi should have released all the political prisoners for creating an atmosphere for talks. I will seek shifting of Kashmiri prisoners to Srinagar jails from outside,” she added. Tarigami supported her bid.

Another demand from Mufti was restarting a dialogue with Pakistan to solve the Kashmir issue.

“There is a need to establish peace in the entire region, not just in J&K. Our government is talking to the Taliban in Doha. There should be a dialogue with people of J&K and also with Pakistan for a resolution,” she said, adding that it would have been much better if the Centre had initiated confidence building measures ahead of the meeting.

“We will continue to demand the restoration of August 4, 2019 position of J&K. We will also seek to address the genuine aspirations of people. There has to be development with dignity,” NC leader and Member of Parliament Hasnain Masoodi said ahead of a meeting in Srinagar.

The NPP president Bhim Singh also said before the meeting that the statehood of Jammu and Kashmir should be restored.

On the other hand, the union government has been clear in its stance that there is no going back to restoring J&K’s special status, and while statehood can be discussed, the main agenda for the government will be seeking cooperation from the parties on the delimitation exercise under way for the Assembly seats.

Earlier top Union Ministers, including Home Minister Amit Shah, had asked the regional parties to limit their demands to Statehood and stop seeking any special status. Ahead of the meet, Shah met Modi and discussed security situation in the Valley.

The preparations for elections in UT of J&K are also underway. PM Modi had hinted last year that elections would be held as soon as the process of delimitation was complete. Modalities of this delimitation exercise were also likely discussed during the meeting.

Reportedly, yesterday (23 June), the Election Commission of India (ECI) held virtual discussions with its representatives in Jammu and Kashmir and deputy commissioners regarding the delimitation of the 90 Assembly constituencies in the Union Territory.

The delimitation committee has been given time until March 2022 to complete its work. Many states including Uttar Pradesh and neighbouring Punjab will go to polls at that time.

Union government wants to move forward with the electoral process in the UT quickly, and would want the political parties to take part in the Delimitation Commission proceedings, convincing them that speeding up the political process is in their interest.

“In politics, there should be constant dialogue….As I can understand, the PM’s meeting indicates faith in the democratic process, and is meant to take it forward by involving maximum number of people,” J&K Lieutenant Governor Manoj Sinha said on Monday.

Mufti had also said on Tuesday: “We are not against a dialogue process. I did not want to be seen as one playing spoilsport or creating obstacles. It was an invite from the PM, the highest office. I was of the opinion that Dr Abdullah should represent the alliance in the meeting since our stand is same.”

Ahead of the meeting, Farooq Abdullah also described the meeting as a “very good step” and “better late than never”. He also said that issues must be sorted through dialogue and the tensions in the relations must be removed.

Communist leader Tarigami also said that while no agenda had been provided for the meeting, “the ice has broken.. at least we are sitting together and talking.”