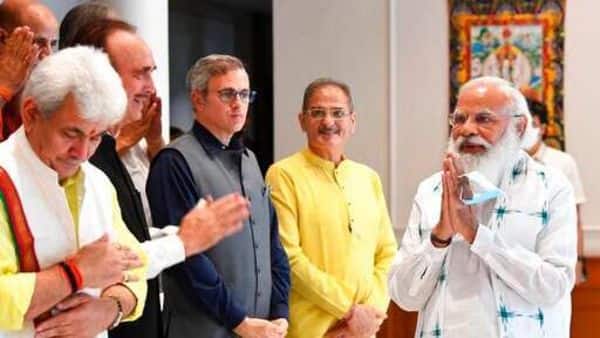 PM Modi said that his government is fully committed to the “democratic process” in the region and holding the assembly elections is a priority, news agency ANI reported quoting sources.

Taking to Twitter, Union Home Minister Amit Shah said, “Today’s meeting on Jammu and Kashmir was conducted in a very cordial environment. Everyone expressed their commitment to democracy and the constitution. It was stressed to strengthen the democratic process in Jammu and Kashmir.”

“We are committed to ensure all round development of J&K. The future of Jammu and Kashmir was discussed and the delimitation exercise and peaceful elections are important milestones in restoring statehood as promised in Parliament,” Shah added.

1) Statehood for Jammu and Kashmir should be restored at the earliest. “The prime minister and the home minister had promised in Parliament to restore J&K’s statehood at the appropriate time. We told the government that now is the favourable situation for it,” Azad said.

2) Congress also demanded the government to hold assembly elections in J&K at the earliest.

3) Ghulam Nabi Azad said the Congress party also demanded that efforts must be made to ensure the return of Kashmiri Pandits and their rehabilitation. “This is our moral responsibility,” Azad said.

4) The fourth demand that Congress raised was that the government should release all social and political prisoners who were arrested/detained on or around August 5, 2019, when Article 370 was abrogated.

5) Besides this, Congress demanded the government to provide guaranteed protection of domiciles on land rights and jobs in J&K.

Assembly polls in J&K once delimitation process is over

Discussions were focused on holding assembly elections in Jammu and Kashmir soon after the delimitation process is completed, to which most participants expressed their willingness.

PM Modi also emphasised on the need to strengthen democracy at the grassroots and work together with the people of Jammu and Kashmir to ensure their upliftment.

PM Modi expressed happiness on the commitment to the Constitution and democracy espoused by all participants. He said that even one death in Jammu and Kashmir is painful and it is ‘our collective duty to protect our younger generation’.

Stressing on the need to provide opportunities to the youth of the Union Territory, the Prime Minister said that the younger generation of the region will give back lots to the country.

The developmental work with the implementation of many pro-people initiatives, carried out over the last two years in Jammu and Kashmir, was discussed in detail in the meeting held at the Prime Minister’s residence.

PM Modi expressed satisfaction with the acceleration of development in the Union Territory and said that ‘it is creating new hope and aspirations among the people’.

“When people experience corruption free governance, it inspires trust among the people and people also extend their co-operation to the administration and this is visible in Jammu and Kashmir today,” the Prime Minister said, according to sources.

The Prime Minister said that there would be political differences but everyone should work in national interest for the benefit of the people of Jammu and Kashmir. He underlined that an atmosphere of safety and security needs to be ensured for all sections of society in the region.

During a three-and-a-half-hour-long meeting with 14 leaders from Jammu and Kashmir, PM Modi patiently heard out suggestions and inputs from all participants.

“PM said that we are fully committed to the democratic process in J&K. He stressed that holding assembly elections just like the successful conduct of DDC (District Development Council) elections is a priority,” sources said.

This was the first meeting between the Centre with the political leaders of the region after the abrogation of Article 370 in August 2019 and the bifurcation of Jammu and Kashmir into two union territories.