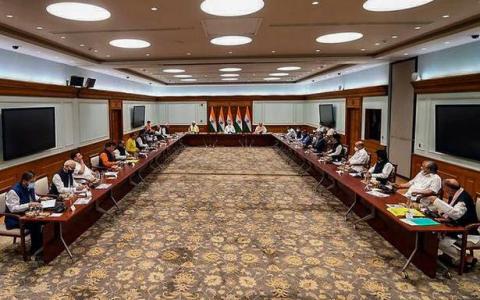 Indian Prime Minister Narendra Modi declared that he was committed to restoring democracy in Jammu and Kashmir and told the restive union territory’s political parties that its statehood would be given back at an appropriate time. Chairing a significant meeting July 24 evening with 14 political leaders from eight parties, including four former chief ministers – three of whom were in detention after the central government stripped the erstwhile state of its special status on August 5, 2019 – the prime minister also assured that the assembly election would be held in J & K once the delimitation process – redrawing the boundaries of Lok Sabha and assembly constituencies – was completed.

It was also the prime minister’s first comprehensive interaction with the union territory’s leading political figures since August 2019.

Government sources told The Hindu that in his address Modi said “Dilli ki doori kam honi chahiye aur Dil ki door bhi” (The distance from Delhi the seat of central power, and the distance between hearts should both be removed) to convey the spirit in which the meeting was called.

“He also asked that political parties constructively engage with the delimitation exercise following which assembly polls could be held in the union territory. He said there can be political differences but national interest should be prioritised,” the paper quoted government sources as saying.

Home Minister Amit Shah, who took part in the over three-hour deliberations at the prime minister’s official residence at 7 Lok Kalyan Marg, later said the meeting discussed the future of J & K “in a very cordial environment” and “stressed (the need) to strengthen the democratic process”.

Asserting the government’s commitment to ensure “all-round development of J&K”, the home minister said in a tweet that the ongoing “delimitation exercise and peaceful elections are important milestones in restoring statehood as promised in parliament”.

“Today’s meeting on Jammu and Kashmir was conducted in a very cordial environment. Everyone expressed their commitment to democracy and the constitution. It was stressed to strengthen the democratic process in Jammu and Kashmir,” the number two man in the central government said in another tweet.

Several Kashmir leaders who attended the meeting later told the media that the prime minister assured them that the assembly election will be held in J & K soon after the delimitation process was over.

The principal regional political parties of J & K later said they demanded the restoration of the Indian Constitution’s Article 370, which accorded special status – with limited political autonomy – to the erstwhile state. On August 5, 2019, the Bharatiya Janata Party-led National Democratic Alliance regime had abrogated Article 370, and bifurcated J & K into two union territories – Jammu and Kashmir with a legislative assembly and Ladakh without one.

Former J & K Chief Minister and Peoples Democratic Party (PDP) chief Mehbooba Mufti agreed the discussions were held in a “very conducive atmosphere”  but demanded the restoration of Article 370, calling it “our identity”.

“We didn’t get this right from Pakistan. Our country has given us. Leaders like Jawaharlal Nehru, Sardar Vallabhbhai Patel had given us this right,” said Mehbooba, who is also vice chairperson of the Peoples Alliance for Gupkar Declaration (PAGD), an alliance of five mainstream political parties seeking restoration of J&K’s special status.

Mehbooba, who had been detained along with two other former chief ministers Farooq Abdullah and Omar Abdullah after the Modi government carried out the far-reaching changes concerning J & K, claimed the “immoral , illegal and unconstitutional” way in which Article 370 was scrapped was not “acceptable to the people” who are “angry”.

“J and K people are going through very tough times. They will carry on a peaceful, democratic and constitutional struggle. We will ensure restoration of article 370’.

In reply to a question Mufti, who headed a coalition government with BJP for about two years—2016 to 2018– before the saffron party snapped the ties, said the Modi meeting had no prior agenda.

Similarly,  PAGD chairman, Dr Farooq Abdullah, who is one of the veteran leaders in the Valley and who was also kept under house arrest for nearly a year, had said there will be no compromise on the special status of Jammu and Kashmir as guaranteed under the Indian Constitution.

The meeting, which brought to the same table the mainstream regional players and two national parties – the ruling BJP and the main opposition Indian National Congress – launched the political dialogue process concerning the future of a territory that has often made international headlines and frequently figured in UN discussions.

Pakistan had shown its nervousness prior to the meeting as to what further steps the Modi government was planning in Jammu and Kashmir and had said appealed to the UN to ensure there was “no further division” or “demographic changes” in the territory on which it has laid claim since the subcontinent’s partition in August 1947.