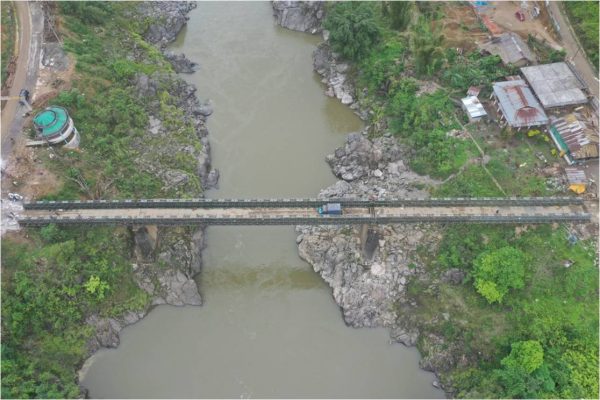 Recent China-India clashes follow a trend: The surest way to forecast flashpoints is by keeping an eye on infrastructure developments along the border.

The pattern of border industrialization and infrastructure development serving as flashpoints is best evidenced by the fact that the last two major clashes, the Doklam standoff and the Galwan valley clashes, also resulted from infrastructure disputes.

The 2017 Doklam dispute was catalyzed by Chinese attempts to build a road within Bhuta’s Doklam region. Indian troops reached the scene to assist their Bhutanese allies and protect the strategically important Siliguri Corridor (the corridor that connects mainland India to its northeastern states), which is only 80 kilometers from Doklam ridge. Similarly, the 2020 Galwan Valley clashes occurred over India’s construction of a road bridge in the valley that connected the important Shyok-Daulat Beg Oldi road to Durbuk in Ladakh. Although the bridge lies firmly within Indian territory, it is only 7 kilometers from the Line of Actual Control (LAC), which provoked the Chinese.

More recently, May 2020 saw China warn against India’s attempt to “unilaterally change the status quo of border territory” by undertaking construction near the Leh border, cautioning that it would incite “necessary counter-measures.” This threat materialized nine months later, in January of this year, as news broke of Chinese troops building an entire village in Arunachal Pradesh. Satellite images showed 101 homes built 4.5 kilometers inside Indian territory. Even the Ministry of External Affairs confirmed that it had received reports of China undertaking construction along the LAC.

Slowing down border development is not an option for the world’s two most populous nations. As both China and India nurse their advancing economies and growing nationalist rhetoric, securing their territories through infrastructure development is a matter of national pride. But the inevitable development of border infrastructure is also the chief instigator of conflict between the two nations.

Such clashes are only likely to increase as both nations ramp up their infrastructure along the LAC. In India’s case, between March 2018 and 2020, the Border Roads Organization (BRO) had built 1,505 kilometers of roads, most of them in Jammu and Kashmir and Arunachal Pradesh. Even during the COVID-19 lockdown, the BRO constructed the Daporijo bridge over river Subansiri in Arunachal Pradesh, which strategically connects India to the LAC. The Ministry of Defense hinted at future aspirations along the Arunachal LAC by reporting that the bridge was upgraded to allow heavier vehicles to pass, “catering for not only Army requirements but the future Infrastructure development requirements.”

On the other side of the border, China’s recent greenlighting of the construction of the Brahmaputra dam in the Tibet Autonomous Region is a worrying development for India. The dam is set to be the world’s largest hydroelectric facility, three times more powerful than the world’s current largest, the Three Gorges Dam, also in China. R. Keerthana cautions that though the dam will annually create 300 billion kilowatt-hours of clean energy for China, it will negatively impact India’s agriculture in downstream areas, upset the Brahmaputra River’s flow into the northeastern states, and endanger sensitive local ecosystems.

With no signs of slowing border development, some identify a silver lining, arguing that the rising frequency of infrastructure construction and resulting clashes are actually markers of progress. Indian Prime Minister Narendra Modi suggested that the better the infrastructure at the LAC, the higher the likelihood of confrontation due to increased patrolling. The implication here is that while high tensions are an unwelcome consequence, more patrolling, in itself, is a step toward greater vigilance. Therefore, more frequent standoffs can also be attributed to the Indian Army’s enhanced ability to “monitor, detect and respond to Chinese PLA patrolling.” Better border infrastructure means better national security.

Similarly, Kyle Gardner, an expert in Indo-China affairs, speculated that while border infrastructure may increase tensions in the short term, gradually, it may pave a semi-precise de facto borderline that may settle some of the overlapping territorial claims. Currently, India and China do not have a mutually accepted and demarcated border. Currently, both neighbors tip-toe around the LAC status quo, which is itself disputed. Gardner warily states that though border infrastructure along the LAC will be contentious in the years to come, it may yield a tangible borderline in the way that India and Pakistan share along the Line Of Control.

Until the future reveals itself, India and China will continue to rapidly build their respective outposts. However, both giants must proceed with caution because any misstep may result in loss of lives on both sides of the border.

A longer version of this piece was previously published on the SPRF website.