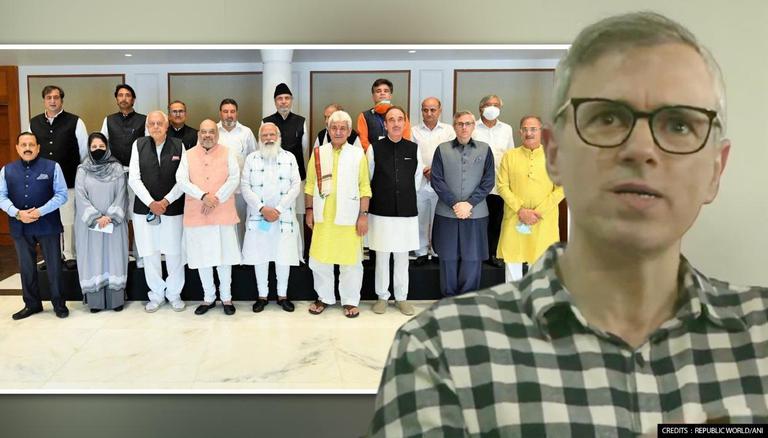 Jammu and Kashmir National Conference (JKNC) leader Omar Abdullah expressed unhappiness over the delimitation process following the all-party meeting with PM Modi on Thursday and vowed to take the legal route against the abrogation of Article 370. PM Modi chaired an all-party meeting with 14 leaders from Jammu and Kashmir – the first such meet since the abrogation of Article 370 on August 5, 2019 – at his residence in Delhi where presentations were made by the Union Home Minister, MoS PMO, NSA Ajit Doval and others.

Addressing the media after the conclusion of the all-party meet, former J&K CM Omar Abdullah claimed that the Central government had broken the trust of the people of Jammu and Kashmir and vowed to take the legal route to ensure the restoration of Article 370. Omar Abdullah demanded full statehood for J&K, citing that it was the people’s demand, and said that he was unhappy with the delimitation process, adding that he wanted Jammu and Kashmir to be like other states.

We told PM that we don’t stand with what was done on 5th Aug 2019. We’re not ready to accept it. But we won’t take law into hands. We’ll fight this in court. We also told PM that there’s been breach of trust b/w State & Centre. It’s Centre’s duty to restore it: Omar Abdullah, NC pic.twitter.com/UjBdTL0mOL

Omar Abdullah claimed that there was an ‘atmosphere of mistrust’ among the people of Jammu and Kashmir for the Centre and said that just one meeting couldn’t put an end to the crisis. Further, Omar Abdullah opined that there was ‘no requirement for the delimitation process’ and noted that it was halted in Assam and continued in J&K  while the process was initiated simultaneously for both states. The former J&K CM revealed that Union Home Minister Amit Shah had assured that the decision on restoration of statehood to Jammu & Kashmir would be taken once the delimitation process was complete and that PM Modi had affirmed that elections would be held once people were ready to elect their representatives.

All leaders demanded full statehood for J&K. Both PM & HM said the work for elections and restoring statehood should start soon. Azad Sahib said that first statehood should be restored and then elections should be held. On this PM didn’t say anything: Omar Abdullah pic.twitter.com/UbYM8GZ19w

Calling for efforts to reduce mistrust between the people of Jammu and Kashmir and the Centre, Omar Abdullah claimed that PM Modi needed no invitation to visit the erstwhile state. Further, the ex-CM claimed that the people of Jammu and Kashmir weren’t happy with the Union Territory tag bestowed upon them and called for ‘decisions that weren’t in the interest of the people’ to be reversed, adding the demand for restoration of statehood.

We requested PM that our fight will continue but it’s essential to reverse some decisions that aren’t at all in the interest of J&K. It was given the status of a UT, people don’t like it. They want full statehood for J&K with J&K cadre restored: Omar Abdullah, National Conference pic.twitter.com/KCbwRgqqc1

‘Centre should work for the restoration of statehood’: Farooq Abdullah

Meanwhile, senior NC leader Farooq Abdullah told PTI that the National Conference would continue to challenge through legal and constitutional means the abrogation of the special status of Jammu and Kashmir under Article 370 of the Constitution. The NC chief said it was vital for the Centre to restore the identity of Jammu and Kashmir at the earliest so that other democratic exercises could be carried forward.

“There is a loss of trust which needs to be restored immediately and for that, to begin with, the Centre should work for the restoration of complete statehood to Jammu and Kashmir,” NC’s Farooq Abdullah said.

I conveyed to the Prime Minister that the statehood means reverting even the IAS and IPS cadres of Jammu and Kashmir. The state has to be in totality,” he said after the meeting that lasted for over three hours.