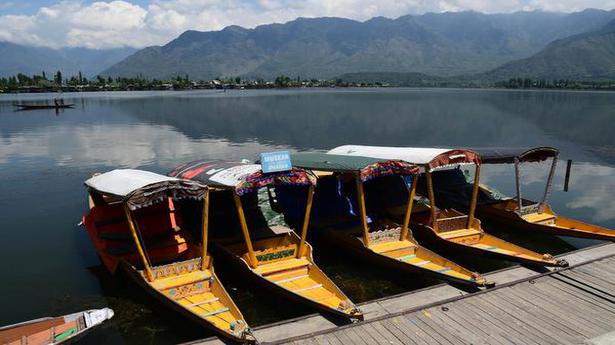 Two years after its dramatic decision to reorganise Jammu and Kashmir (J&K), the Government appears to be rethinking some of the objectives it announced then as Prime Minister Narendra Modi engages the erstwhile State’s former leadership to discuss the future of the political process there. Mr. Modi and Home Minister Amit Shah had spoken of three specific objectives in the move to amend Article 370 on August 5, 2019, apart from ending terrorism and violence in J&K: flooding the region with development initiatives and investment from other parts of the country; reclaiming those parts of the territory now occupied by Pakistan and China (Pakistan Occupied Kashmir, or PoK, and Aksai Chin), and ending the rule of political “dynasties” in J&K — that they claimed had held the progress of the State hostage — in favour of a “Naya Kashmir” polity. Above all, the Government underlined, as External Affairs Minister S. Jaishankar undertook a series of visits abroad to explain its nuances, the decision was purely an “internal” one, and did not affect India’s ties with any other country.

While two years may not be long enough to truly judge the success of its intentions, particularly given the impact of the novel coronavirus pandemic, it is certainly fair to say the Government has failed to make headway with most of those objectives. Incidents of terrorism and violence have no doubt decreased since 2019, but that has come at the cost of massive privations to the people in the name of security. More than 5,000 people were arrested, the longest Internet shutdown in any democracy was instituted for 213 days, and the deployment of troops still remains at peacetime highs. The plight of the ordinary Kashmiri, battling daily intimidations from security forces, the closure of schools and online education for their children, and diminishing sources of income, can only be imagined. Attempts to convince investors that this is a lasting peace have floundered thus far, and while the Government claims it has more than 400 memoranda of understanding from businesses nationwide promising to invest in the Union Territory, this can only be tested once the money actually comes in, given the state of the national economy, even prior to the pandemic.

Mr. Shah’s claim in Parliament that his government was willing to “sacrifice lives” to ensure the return of Pakistan Occupied Kashmir and Aksai Chin, appears a much more difficult proposition in the face of the Chinese aggression at the Line of Actual Control (LAC) since April 2020. Chinese actions, and the failure of military and diplomatic talks to ensure the restoration of status quo ante have been coupled with the growing threat perception, articulated by the Indian Army Chief, that any future conflict at the LAC would need to account for a two-front “situation” with Pakistan at the Line of Control as well, and vice versa. Even the United States is unlikely to countenance any military manoeuvre involving PoK now, given its proximity to the Afghanistan theatre, and the U.S.’s pullout and the increasing strength of the Taliban will add to the risk calculus in Delhi against such actions.

Finally, the outreach to 14 leaders from J&K, many of whom were arrested for months, indicates that the Government’s plan for a “Naya Kashmir” polity is not drastically different from the previous polity — that the Home Minister referred to derisively as the “Gupkar Gang” — despite intervening attempts at building a new party (Apni Party), sidelining the main parties during consultations and even promoting “District Development Councillors” as the new Kashmiri leadership during meetings with foreign diplomats.

The Government’s repeated assertion that its August 5 decision on J&K was an “internal one” has also been put to a rigorous test. Despite considerable exertions by the Ministry of External Affairs and its missions worldwide, J&K has now been discussed in more capitals, including the U.S. Congress, Parliaments in the United Kingdom, the European Union (EU) and the Nordic countries, than ever before, while several delegations of EU parliamentarians, Ambassadors and United Nations diplomats have been escorted to the valley to elicit their approval for the situation there. It is ironic that countries which were openly supportive of the Modi government’s military action in PoK in 2016 after the Uri attack, and of the Balakot strikes by the Indian Air Force in Pakistan after the Pulwama attack in 2019, have even so, chosen to be so critical of a political and internal move. In addition, the J&K dispute has been discussed at least three times at the UN Security Council, which had not touched the issue since 1971.

What is more galling is the notion that the decision to engage the previous leadership, to discuss the restart of a political process and the reversal of the August 5 decision to downgrade the State to a Union Territory, comes not from domestic considerations alone. In the past few months, it has been made clear that a backchannel dialogue between India and Pakistan is discussing assurances on J&K that would enable a broader bilateral dialogue. Pakistan too has climbed down considerably from its previous demands of plebiscite and UN resolutions, to Pakistan Prime Minister Imran Khan’s more recent statements that he would be willing to talk if there was a reversal in some of the August 5 steps, or if the Modi government proffers a “roadmap” on J&K. Even Pakistan’s insistence on the restoration of Article 370 was a turnaround from the days when it rejected the Article’s validity. Both the downturn in Pakistan-backed violence in Jammu-Kashmir as well the softening of rhetoric suggest a flexibility borne out of international pressure as well as the sustained threat of a (Pakistan) blacklisting by the Financial Action Task Force.

Such compromises by hawkish establishments in Delhi and Islamabad (and Rawalpindi) do not come from an internal rethink by themselves, and it would seem obvious that external prompting from the U.S., keen to complete its Afghanistan pullout and its negotiations with the Taliban, as well as nudges from Saudi Arabia, Qatar and the United Arab Emirates, of the kind publicly referred to by the UAE envoy as “mediation”,have been at work as well. The recent disclosure by the Qatari special envoy that Indian officials have engaged the Taliban leadership in Doha is also part of that matrix. The Government’s decision to shut down operations at two of its Afghanistan consulates, in Jalalabad and Herat, which was earlier described as a temporary move due to the novel coronavirus pandemic, is clearly linked to safety concerns in the phase after the U.S. pullout.

In the broader geopolitical context, as the drumbeats to a U.S.-China confrontation grow louder, India’s global strategies will be further put to test. The U.S.’s expectations of cooperation from India to its East, on China and the Indo-Pacific, have clearly not been commensurate with New Delhi’s expectations that America would reduce India’s threats to its west, from Afghanistan and Pakistan. Instead, it would seem, the Government’s attempts to sever the Gordian knot in Jammu and Kashmir with its moves two years ago, are being drawn into a more complex game of regional dominoes, where India’s security interests are increasingly in play.