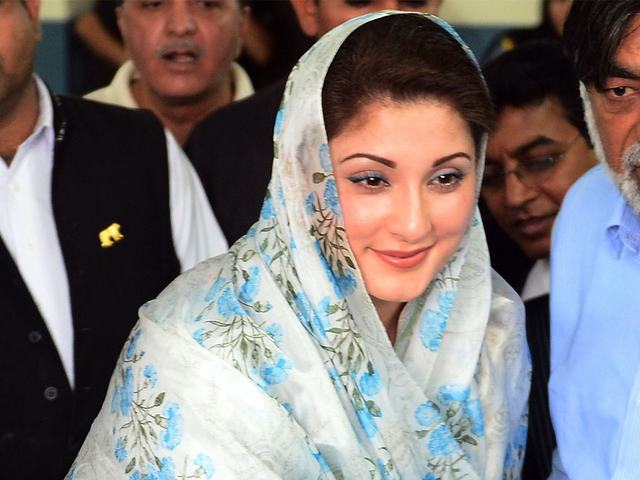 Talking to reporters after appearing at the Islamabad High Court (IHC) in a case against her, Maryam also strongly opposed the government’s proposed plan to lease out motorways and airports as budgetary support measures. When her comments were sought on Prime Minister Khan’s recent interview with the foreign media in which he had stated that if there is a settlement on Kashmir, the two neighbours – India and Pakistan – would live as civilised people and they would no longer need to have nuclear deterrents.

“I don’t know how to construe this [the PM’s] statement or this state of mind… [or] what name I should give to this man [Imran Khan] for giving such a “weird” statement?” she said, while commenting on Prime Minister Khan’s statement.

“He [the PM] should remember that he is neither [the] custodian of the country’s nuclear programme nor is he representative premier of the people. Rather, he is “selected” and [he] was imposed on the people through stealing the 2018 general elections. No one has given him the right to even comment on Pakistan’s nuclear programme…the 220 billion people are its custodian, for which they and the leaders had given sacrifices,” she said, adding that former premiers – Zulfiqar Ali Bhutto embraced martyrdom and Nawaz Sharif got exiled for the reason.

She said Pakistan’s nuclear programme guarantees security of the country and its future generation.

“Had the atomic deterrence not created, the country would have been facing bigger issues, besides the Kashmir. So, it guarantees Pakistan’s security and you, being a “selected” prime minister, have no right to make such a statement on the nuclear programme,” she added.

She went on to say that Prime Minister Khan should not even talk about Kashmir, accusing him of making a deal on Kashmir with India. “If you think you could start a new debate by making such remarks on Kashmir, you are wrong,” she added.

To another question about Prime Minister Khan’s remarks on incidents of rape, Maryam said the views were reflective of a “criminal mindset”, adding the premier’s remarks had exposed his mindset.

“Think over it, if a person is going to validate rape and holds the victims as responsible for the heinous crimes such as rape instead of holding the culprits as responsible. Pakistan needs to get rid of this mindset of rape apologists,” she maintained. She posed questions to the premier as to whether a child namely, Zainab and the woman on motorway were subjected to rape because they had worn wrong clothes?

“You should be ashamed of giving such remarks in which you are validating a crime and blaming the victim,” she said. Responding to another query about the government’s proposed plan to lease out motorways and airports, she asked the prime minister as to who has given him the right to lease out the motorways and the airports.

“When you have zero contribution to Pakistan’s development, you have no right to lease out the major projects such as motorways and airports,” she added. She also recalled that when Imran Khan was in the opposition he had claimed from the containers that he had a team of 200 economic experts. “You had been saying from over the container that development does not come through construction of motorways and roads. What development would come from leasing out the projects which were installed by Nawaz Sharif?” she asked.

“He [the PM] may put the entire country at risk and put the country’s assets on sale for saving those whose shoulders he needs for continuation of his government…he would come to their rescue whether he is associated with business of pizza [Asim Bajwa], or involved in scandals such as Ring Road project, sugar and wheat scams,” she said. He even reached them at their homes for giving them “NRO” only to save his sinking ship, she said in reference to Zulfi Bukhari and Jahangir Tareen. “But Pakistan cannot afford such things to happen anymore,” she added.