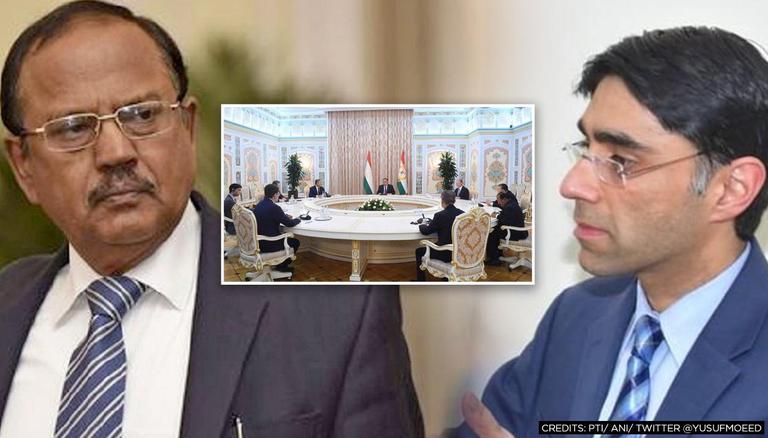 Sharing a stage for the first time since the abrogation of article 370, NSA Ajit Doval and Pakistan NSA Moeed Yusuf attended the Shanghai Cooperation Organisation (SCO) meeting on Wednesday at Dushanbe, Tajikistan. They were part of the discussion on international terrorism, extremism, separatism, radicalism, risks of increasing transnational organized crime, arms & drug trafficking with other SCO nations’ NSAs. The two did not hold a separate meeting. The SCO comprises major Asian powers such as China, Kazakhstan, Kyrgyzstan, Russia, Tajikistan, Uzbekistan, India and Pakistan.

The meeting discussed cooperation between member states in ensuring reliable information security, the joint fight against cybercrime, and the issues of biological security and food security in the context of the coronavirus pandemic. The meeting also stressed on SCO’s regional anti-terrorism structure playing an important role in ensuring regional security and strengthening ties between member states in combating threats & challenges of the modern world. The meeting was held in-person unlike the virtual meeting last year due to the COVID-19 pandemic.

Last year, Doval furiously stormed out of the SCO meeting last year following Pakistan’s act of showing a ‘distorted’ map violating the agenda of the gathering.  In a statement after the meeting, the External Affairs Ministry had said that the Pakistani NSA deliberately projected the map which showed Kashmir, Siachen, Gilgit-Baltistan, and Junagarh as part of Pakistan. “This was in blatant disregard to the advisory by the host against it and in violation of the norms of the meeting. After consultation with the host, the Indian side left the meeting in protest at that juncture,” he said.

While Pakistan has continuously criticised India over the revocation of Article 370, CAA, Kashmir, terrorism, COVID-19 management, on  February 25, India and Pakistan reiterated the existing mechanisms of hotline contact and border flag meetings, agreeing to a ceasefire. Moreover, Pakistan Army Chief General Qamar Javed Bajwa called for India to ‘bury the past and move forward’ as the peace between the two neighbours would help to ‘unlock’ the potential of South and Central Asia. Immediately, Pakistan PM Imran Khan backtracked maintaining that no talks can be held with India till Article 370 is restored.