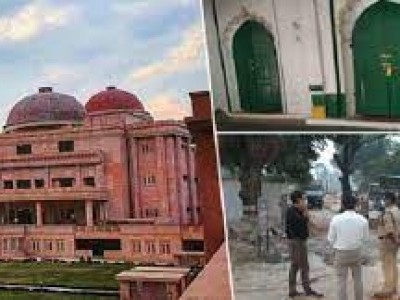 Lucknow: The Allahabad High Court Tuesday directed the respondents to file their responses within three weeks in connection with the demolition of a mosque at Barabanki on May 17.

The Lucknow bench of the HC also issued a notice to the then Sub-Divisional Magistrate (SDM) of Ram Sanehi Ghat in Barabanki for his reply as malice was alleged against him.

It also granted a week to the petitioner for filing a rejoinder affidavit, fixing July 27 as the next date of hearing.

A division bench of Justice Rajan Roy and Justice Saurabh Lavania passed the order on two writ petitions filed by UP Sunni Central Waqf Board and Hashmat Ali and others.

The bench had heard the matter on June 15 and reserved its order on the question of interim relief.

The bench recorded in its order that the senior advocate appearing for UP Sunni Central Waqf Board was unable, as of now, to show any documentary proof about the ownership right of the committee of management on the land where the mosque was constructed.

In the writ petitions, it has been alleged that the mosque was standing for hundred years on the land recorded as abadi land in revenue records.

It has been alleged further that the then SDM Ram Sanehi Ghat, due to personal grudges and mala-fide reasons, got it demolished on May 17, 2021 in the garb of powers exercised under section 133 of CrPC.

“The matter was beyond the scope of exercise of power under Section 133 CrPC, yet, the SDM, only to satisfy his personal ego and out of malice, not only proceeded under the said provision unjustifiably and illegally, but ensured that the mosque is demolished,” charged the petitioners.

It was also pleaded that here is no place for personal ego, whims and fancies in a country governed by rule of law.

The state lawyer opposed the petitions and pleaded that the writs were not maintainable.

After hearing the matters, the bench issued notices to the respondents and asked them to file their detailed reply.