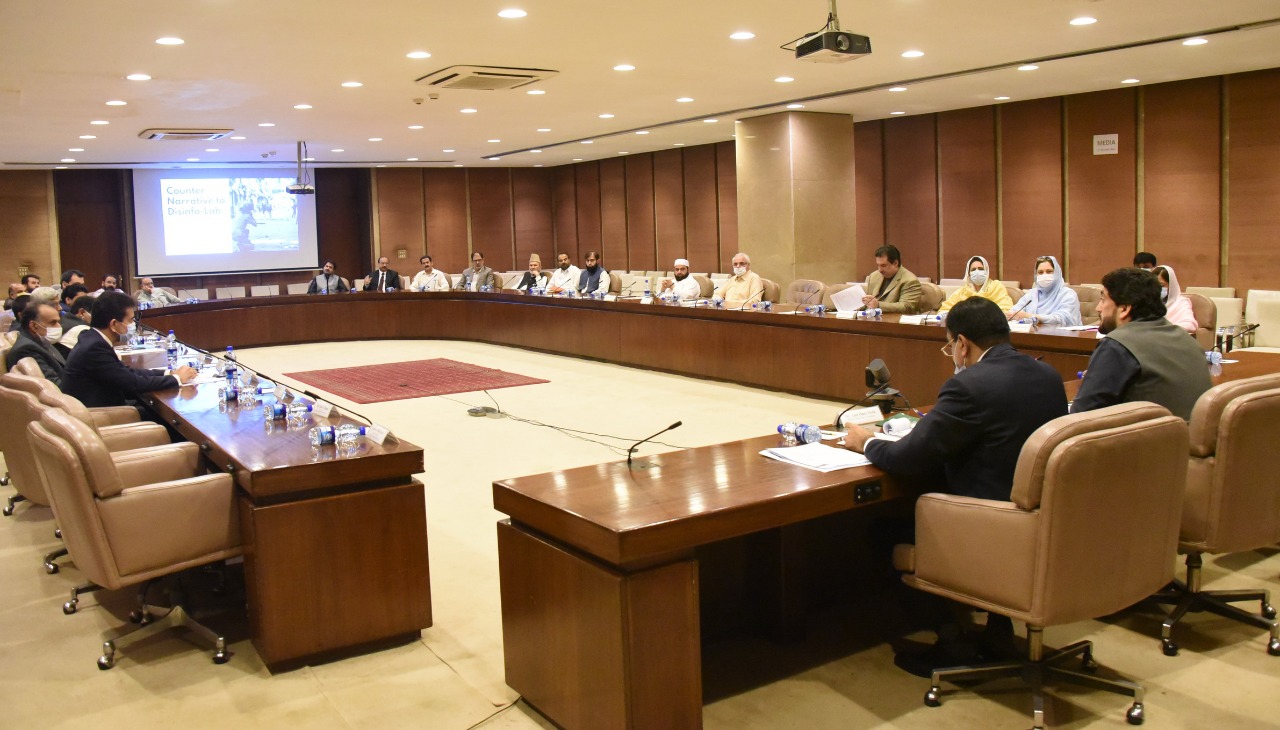 ISLAMABAD: The Parliamentary Committee on Kashmir Wednesday was briefed on the strategy evolved by its Advisory Board on Digital Media to adopt counter measures to the Indian information terrorism being projected through fake news on Kashmir as well as Pakistan.

Kashmir Committee was given a detailed briefing by a team comprising Advisory Board team of the Committee on a strategy to the counter Indian fake news on Kashmir issue.

Chairing the meeting of the Kashmir Committee here, Shehryar Khan Afridi said that India is involved in information terrorism while Pakistan and Kashmiris are victim of Indian fake news. He said that EU Disinfo Lab had fully exposed the Indian networks of fake news and Pakistan needed to counter Indian fake news on the digital and mainstream media spheres. Chairman Kashmir Committee Shehryar Khan Afridi said that artificial intelligence is the way forward and Pakistan would have to employ all its energies to tap all opportunities and our true content on the digital space.

“We are creating an online data repository to provide factual information on Kashmir. This would help the world know what’s actually happening on ground in the occupied Kashmir and how Indian fake websites and mainstream media was manipulating and twisting information to create fake news. We need to counter the Indian fake news and tell truth to the world,” he said.

CEO Ahsan Mashkoor and CPO Abu Abdullah Ashar from ISSM Labelling Solutions – an AI focused company – were called upon by Special Parliamentary Committee On Kashmir to present how AI can help fight back fake news.

Khurram Dastagir MNA said that the content on Kashmir must be in multiple languages so as people from many cultures and languages may understand the narrative.

He urged Kashmir Committee to tap modren tools of IT to help influence the young generation across the world. He said the target audience must be the influencers and diplomats in major capitals of the world.

In his presentation, Ahsan Mashkoor spoke about the structural disadvantages of Pakistan due to lack of critical technology architecture and absence of a centralised data repository.

To tackle this, Ashar proposed to create a centralised data repository that constitutes of factual data and real time statistics, which can be used as reference point to control Misinformation and fake content.

The centralised data repository will become a reference point for their NLP/NLU engine that will identify fake news and highlight it in real-time. These same tools can also be used to crawl high domain worth websites such as Wikipedia to track fake information and be reported accordingly.

The parliamentary committee also discussed how Pakistan has been a victim to Informational terrorism where our democracy has been influenced by propaganda and fake news.