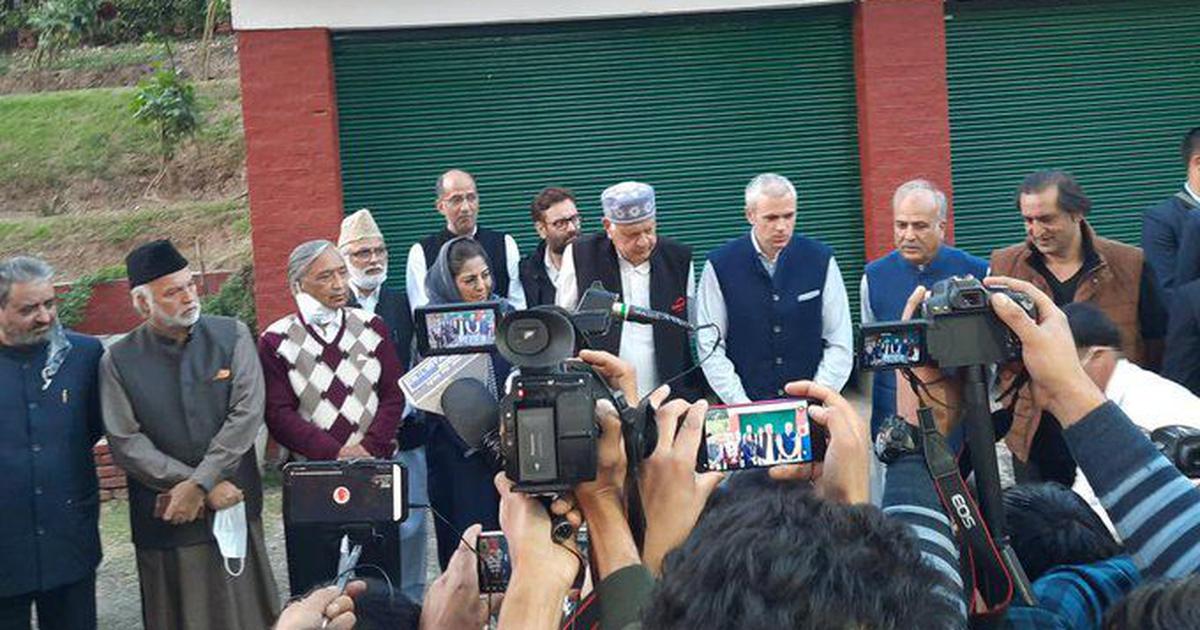 Srinagar: People in Jammu and Kashmir remain sceptical about the proposed deliberation between regional political parties and the BJP-led Central Government in New Delhi on Thursday. Even as some are “hopeful” about its outcome, other see “futility” in engagement without results.

The talks are seen as first major engagement between the two sides since the abrogation of Article 370 and bifurcation of erstwhile state of Jammu and Kashmir was carried out arbitrarily on August 5, 2019. The Central Government imposed a severe clampdown on the people of the region and arrested all regional political leadership, including three former chief ministers of J&K, those the BJP believed would oppose its unprecedented move.

The regional parties, including the formidable National Conference (NC) and People’s Democratic Party (PDP), formed a group with five other parties called the People’s Alliance for Gupkar Declaration (PAGD) to advocate a restoration of the so-called special status for J&K. The BJP leadership, however, launched scathing attacks on these parties, calling them “dynasts” with little influence on the ground.

Following the abrogation exercise, the people in the Valley faced an unprecedented crackdown from the authorities with no space for dissent or protest. There was a crackdown on lawyers, rights activists, politicians and individuals with any previous record of being associated with militancy. Many, including the mainstream leadership in Kashmir, alleged the government was governing the region with an iron fist. Serious charges have been slapped against the kin of slain militants and political prisoners for mourning at funerals, increasing disquiet among the locals.

“The talks would mean anything if there was any respite from all the arrests and cases aimed to impose silence. There are hundreds of youth and elderly who have been languishing in jails for years and such arrests continue to take place,” Daood, a school teacher from Srinagar, told Newsclick.

The region has also suffered substanial losses in business and trade amidst the political uncertainty. But, there is “hope” amongst the traders regarding the all-party meeting.

“Whenever there is engagement it is good for everyone. It is good that talks have been initiated and we are hopeful that something good comes out of it. Engagement bodes well for business and we hope things are resolved,” said Sheikh Ashiq, president of Kashmir Chamber of Commerce and Industries (KCCI).

However, political analyst Dr. Sheikh Showkat Hussain said there were little gains to be made from the talks and that it seems Kashmir’s parties may end up endorsing Delhi’s plans aimed at “Muslim disempowerment”.

“New Delhi may grant statehood and state subjects back to Kashmir in return for the regional parties’ endorsement to delimitation; the 370 decision may be in a modified form. This is my assessment of the system that exists in Delhi,” Dr. Showkat said.

However, the former head of the department of law at the Central University of Kashmir added that there were other questions over whether the deliberations were happening due to “external pressure. Then we can see it as an exercise to buy time and the people of Kashmir will gain nothing,” he said.

In Jammu, people said they at least expect the restoration of “statehood” for J&K as an outcome of these talks. However, there are some who are still “dissatisfied” with the government and demand the restoration of statehood with other special rights guaranteed under the Constitution.

A PhD scholar at Jammu University and resident of Udhampur district, Asha, hopes the talks would at least resume political activity in the region.

“Since J&K was confined to a UT, the lack of a political interface has hurt the middle-class the most. We were told the region would see development but nothing has changed in the last two years. The restoration of statehood, political activities as well as the implementation of pro-people measures is urgently required,” Asha said.

As the abrogation of Article 370 opened jobs for non state-subjects, a section of people in Jammu, especially students and the unemployed youth, have been facing the heat.

“Ladakh protested for an exclusive job policy while in the name of development we are even deprived of that. Its better if few sections of Article 370 are restored. It is for the betterment of the people,” Vikas, who is currently looking for a job in Jammu, said.

Many have also pinned their hopes on the possibilities around the formation of Jammu as a “separate state”, a rumour that spread recently in the region which was dispelled later by LG Manoj Sinha.

“Jammu’s growth has been stalled by the conflict in Kashmir. Terror activities and curfew occur on a daily basis affecting the economy and development in Jammu. I don’t fully endorse it but if I think about it, Jammu will flourish if it is given separate statehood,” Devinder Kumar, a taxi driver in Jammu, told Newsclick.

Socio-political groups in the winter capital are also “angry” with the Centre as they see the renewed engagement as a “surrender” to Kashmiri politicians. Dogra fronts, including the right-wing Ikkjutt Jammu, had organised a protest on Tuesday.

The Kashmiri Pandit migrant community are miffed that they have no representation in the all-party meet. “We should also have been a party to this meeting. We expect the government to tell us what has been done for KPs in the last two years. By when will we return? What is the plan for us?” said Tej Krishan Koul from a settlement for migrants in Jagti.