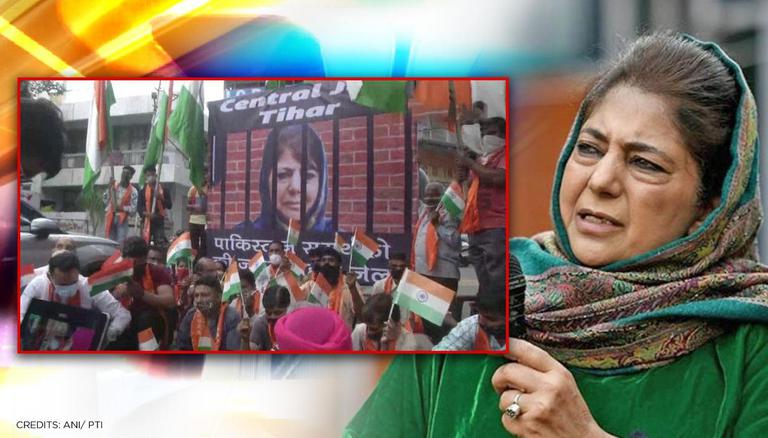 PDP chief Mehbooba Mufti is receiving massive flak and protests are currently underway against her for her recent statements which implied that she batted for talks with Pakistan. Mehbooba Mufti, in her statement, said that Pakistan should be included in India’s internal matters. Mufti had suggested that Pakistan should be invited in order to reach a resolution in the Jammu and Kashmir issue. The protests come hours before a major all-party meeting with Prime Minister Narendra Modi.

The Dogra Front is protesting against Mehbooba Mufti in Jammu for her statements. Many people were seen waving the Indian tricolour and raising slogans against the former J&K Chief Minister. In addition, they have also demanded that Mufti should be behind the bars for her statement. In addition, a banner showing Mufti behind the bars was also displayed by the protestors. Speaking to Republic TV, one of the protestors said that Mufti should be jailed in Tihar as she remarked that Pakistan is a stakeholder in the Kashmir issue. Moreover, he opined that Mufti’s statement will cause ramifications and tarnish India’s image in the United Nations.

“This protest is against Mufti’s statement which she gave after Gupkar meeting that Pakistan is a stakeholder in Kashmir issue. She should be put behind bars,” says a protester pic.twitter.com/Mea8if43se

“Kashmir is an internal matter which has been resolved after the abrogation of Article 370. Just look at the ramifications of her statement. J&K CID Police Officer Parve Ahmed Dar was killed and yesterday a mobile shop owner in Habba Kadal was killed. Whenever she makes any statement like this, Pakistan has started raising the issue. It was earlier nullified from the whole issue. Pakistan will point out Mehbooba’s statement and raise it in the United Nations,” the protestor added.

The PDP chief had said that Pakistan should be included in the talks to resolve the Kashmir issue. Citing India’s talks with the Jammu and Kashmir leaders in India and with the Taliban at their office in Doha, Mufti said that the Indian government should similarly have a dialogue with all parties, including Pakistan for a resolution on the issue of Jammu and Kashmir.

“They say there are engaging in dialogues with us, we say they are doing dialogues with Taliban in Doha. Then in Jammu and Kashmir, they should do dialogues with everyone including Pakistan to reach a resolution.” said Mufti

However, hours after her statement, Mufti changed her stand and said that she will speak about J&K during the all-party meeting and not Pakistan.

Prime Minister Narendra Modi has called for an all-party meeting on Thursday. The meeting will include all opposition parties and alliances, including the People’s Alliance for Gupkar Declaration (PAGD). Ahead of the meeting, the Gupkar Alliance held a meeting to discuss the strategy and agenda for the all-party meeting. The Gupkar alliance has said that it will meet the PM and put forth certain demands before him. The meeting will be the first-ever all-party meeting between PM Narendra Modi and the political parties of the union territory since the abrogation of the special status of Jammu and Kashmir.