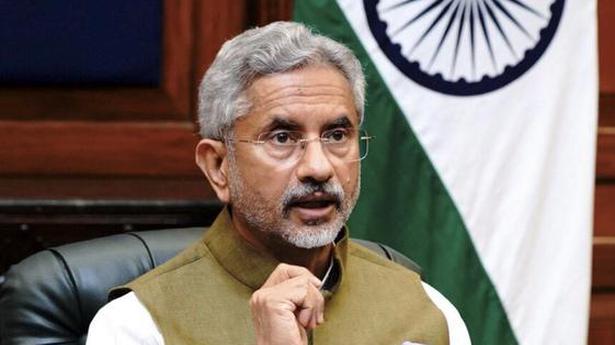 Deployments to prevent encroachment of our territory, says Beijing in a sharp reaction

Continuing “close up deployments” and questions about whether China would “live up to its written commitments” on not deploying a large number of forces were two issues at the heart of the recent tensions along the Line of Actual Control (LAC), External Affairs Minister S. Jaishankar has said.

Also read: A year after Galwan clash, China beefing up positions along LAC

The Minister was speaking at the Qatar Economic Forum on Tuesday, where he was asked about the boundary situation. The Chinese Foreign Ministry on Wednesday reacted sharply to a question on his comments, telling reporters that China’s deployments were “to prevent the encroachment… into China’s territory by the relevant country”.

The comments from both sides underlined the continuing tensions, and stalemate, along the LAC, with military-level talks failing to make headway following an agreement to disengage at Pangong Lake in February. Talks on continuing stand-offs have been slow-moving, with unresolved issues in Depsang, Demchok, Gogra and Hot Springs areas in Ladakh.

Asked about what role the Quad — the informal India, U.S., Australia, Japan — grouping could play in India’s response to the border situation, Mr. Jaishankar said, “I think when it comes to Quad and the India-China border issue, we’re talking apples and oranges. I’m not quite sure I’d really see a tight connection.”

While the Quad had “come together on a common agenda” that included maritime security, connectivity and even working on vaccines, the border issue, he said, “has pre-existed upon, in many ways, it’s a challenge, a problem, which is quite independent of the Quad”.

He said there were “two big issues”. “One of course is that the close up deployments still continue, especially in Ladakh. The issue there is whether China will live up to the written commitments which are made about both countries not deploying a large armed force at the border. And the larger issue really, whether we can build this relationship on the basis of mutual sensitivity, mutual respect and mutual interest. So I do see why you’re interested in both the issues, but I would urge you to look at them, somewhat independent of each other,” he said.

In Beijing, China’s Foreign Ministry spokesperson Zhao Lijian told reporters on Wednesday, “The military deployment by China in the western sector along the border is a normal defensive arrangement.”

“It is meant to prevent the encroachment of, or threat against, China’s territory by the relevant country,” Mr. Zhao said. “For quite some time, the Indian side has been increasing its military along the border and encroaching upon Chinese territory,” he said. “This is the root cause of the tense situation along the border.”