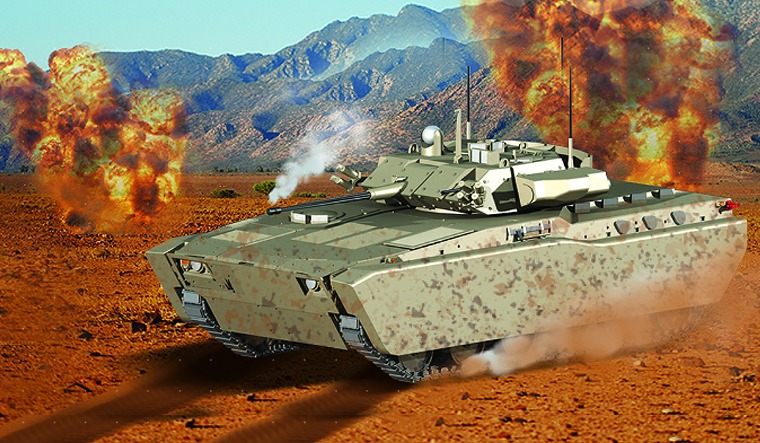 Infantry combat vehicles, or infantry fighting vehicles as they are called in the west, are armoured vehicles that are the main means of transport of ‘mechanised infantry’. These vehicles can carry anywhere from five to 10 soldiers into battle, while also being capable of engaging targets on the ground using guns and anti-tank missiles.

The RFI issued by the Indian Army specifies that it intends to procure up to 1,750 FICVs in three versions. The three versions are a ‘gun version’, a command version and a command and surveillance version. The ‘gun version’, which is primarily meant for combat operations, will constitute the bulk of the intended order quantity (55 per cent). Command versions of infantry combat vehicles are used by battlefield commanders to direct operations and correspond with superiors.

The Indian Army specifies the FICVs will be procured in the spirit of ‘Make in India’ and ‘Atmanirbhar Bharat’ programmes.

The Indian Army RFI specifies that the FICV should be equipped with at least a 30mm main gun and anti-tank missiles. These weapons have been standard features on infantry combat vehicles in both the erstwhile Soviet bloc and the west since the 1980s. However, apparently accepting the changing trends in warfare, the Indian Army has specified that the command and command and surveillance versions of the FICV be capable of carrying drones for surveillance and also suicide strike missions (known as ‘loitering munitions’).

In addition to loitering munitions, the Indian Army RFI specifies the command and surveillance version of the FICV carry one ‘mini’ UAV that is capable of vertical take-off and landing, like a helicopter. The RFI specifies the mini-UAV be capable of an endurance of at least 60 minutes and a range of 10km. The Indian Army has specified the UAV provide real-time colour, high-definition imagery and video back to the FICV to “enable engagement by other weapon systems like Mortars, Loiter Munition, Artillery, Attack Helicopters etc”.

The Indian Army intends to use the FICV to replace the 1980s-vintage BMP-2, which is a Soviet-designed infantry combat vehicle.

Proposals to develop a replacement for the BMP-2 have been hanging fire for two decades. In the late 1990s, the DRDO began work on the ‘Abhay’, a technology demonstrator vehicle that would provide the basis to begin replacing the BMP-2. Multiple proposals have been put forth to develop the FICV as a public-private partnership, with initial figures saying up to 3,000 vehicles would be bought at a price of $10 billion. However, these proposals have not come to fruition.