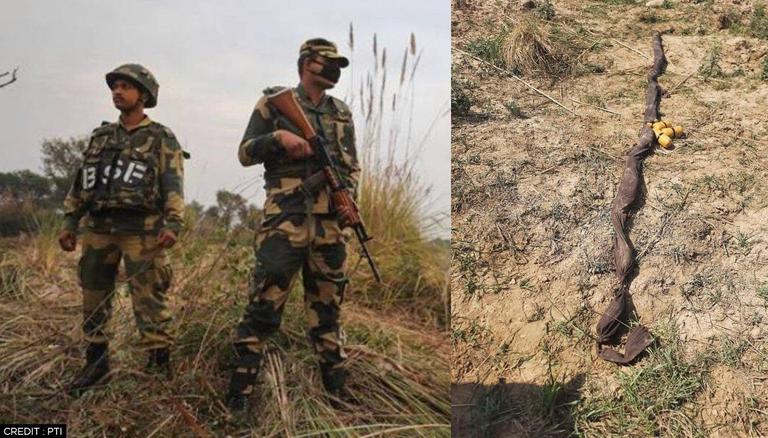 The Border Security Forces (BSF) on Wednesday foiled the smuggling attempt of alleged Pakistani smugglers and seized 27 kg of heroin worth Rs 135 crores along the Kathua border in Jammu. BSF in its press release said, “In the early hours of June 23, the ever-vigilant troops of BSF Jammu thwarted a narcotics (heroin) smuggling attempt by Pakistan smugglers on Kathua border and seized about 27 kg of narcotics.”

Stating that the troops were alerted after noticing a suspicious movement on the international border from the Pakistan side, the BSF informed that when the smugglers attempted entry towards the Indian side of the border, they were challenged and fired upon. It further added that during the search of the area, 27 packets of heroin were found near the fence. The approximate value of this narcotics consignment is estimated to be about Rs 135 crores.

“With this recovery, BSF Jammu has once again exposed the nefarious designs of Pakistan authorities to smuggle narcotics consignment to India through the international border. Narco-terrorism angle can also not be ruled out,” the release read.

According to the police head, security forces are currently focusing on bringing down the narcotics which is smuggled by Pakistani terrorists in Delhi and Punjab. The money that they get through this gets distributed amongst local terrorists and it is the biggest challenge for us, added IGP Vijay Kumar. Recently, the police had busted one of the biggest narco terror modules in Baramulla.

The June 21 operation was one of the major crackdowns by the Kashmir police along with CRPF jawans as they were able to gun down terrorist Mudasir Pandit on whom a reward of Rs 5 lakh was announced. Along with Mudasir, two other terrorists were also neutralized in the Gund Brath area of Sopore in the north Kashmir district.

Earlier in May 2021, the Jammu and Kashmir Police had busted a Pakistan-sponsored narco-terror module in the Kupwara district and seized heroin worth Rs 50 crore. In the operation, a terrorist identified as Mujasir Ahmad Lone, a resident of the Karen Bala area of the north Kashmir district, was also arrested.