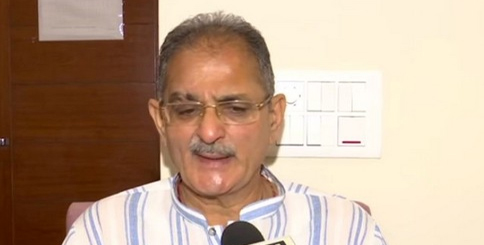 NEW DELHI: Former Deputy Chief Minister of Jammu and Kashmir and Bharatiya Janata Party (BJP) leader Kavinder Gupta on Thursday thanked Prime Minister Narendra Modi for today’s all-party meeting and stated that it will give new hope to the people of Jammu and Kashmir.
“I thank Prime Minister Narendra Modi for taking the initiative, especially after the deadlock in the political situation in Jammu and Kashmir after August 5, 2019. I hope this will give new hope to the people of the region,” Gupta said.
“This is obvious that there will be political discussions in the meeting. Everyone should put forth their views if it is in the national interest,” he added.
This is the first high-level interaction between the Centre and political leadership mainly from Kashmir since August 5, 2019, when the Centre revoked the special status of Jammu and Kashmir and the state was bifurcated into two Union Territories.
Among the leaders who are scheduled to participate in the meeting are Congress’ Ghulam Nabi Azad, Tara Chand and GA Mir; National Conference’s Dr Farooq Abdullah and Omar Abdullah; PDP’s Mehbooba Mufti, J-K Apni Party’s Altaf Bukhari; BJP’s Ravinder Raina, Nirmal Singh and Kavinder Gupta; CPI(M)’s M Y Tarigami; National Panthers Party’s Prof Bheem Singh; and Peoples Conference’s Sajad Gani Lone.
Home Minister Amit Shah, National Security Advisor Ajit Doval, Jammu and Kashmir Lt Governor Manoj Sinha and Home Secretary would also attend the meeting. (AGENCY)