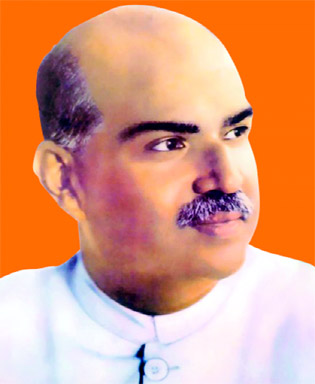 Ravi Rohmetra
Dr. Shyama Prasad Mukherjee was born in a Bengali Hindu family on 6th July 1901 in Kolkota , the capital of British India. His father was Sir Ashutosh Mukherjee, a well respected advocate, well known as Bengal tiger, who became the vice chancellor of the university of Calcutta and his mother was Jagmaya Devi Mukherjee. Shyama Prasad Mukherjee grew up to be ” an Introvert” rather insular a reflective person , also an emotional person .” who needed someone else by his side to give him emotional support. He was seriously affected by the early death of his wife Sudha Devi and never remarried or sink in grief. Mukherjee graduated in English securing the first position in first class in 1921 and also did M.A in 1923 and BL in 1924 . He became a fellow of the senate in 1924 after his father’s death. Subsequently, he left England in 1926 to study at Lincoins INN and became a Barrister in 1927 . At the age of 33 years Mukherjee became the youngest Vice Chancellor of the University of Calcutta and held the office till 1938. He enjoyed only eleven years of married life and had five children. He was elected as member of the Legislative Council of Bengal, as an Indian National Congress candidate representing Calcutta University but resigned next year when the Congress decided to boycott the legislature Mukherjee started his political career in a small way in 1929 as a Legislative Council. Subsequently, he contested the election as an independent candidate and got elected. He was the Finance Minister of Bengal province during 1941-1942.
He emerged as a spokesman for Hindus and shortly joined Hindu Mahasabha and in 1944 he became the President . He was a political leader who felt the need to counteract the communalist and separatist Muslim League of Muhammad Ali Jinnah, who were demanding either exaggerated Muslim rights or a Muslim state of Pakistan. He wanted Hindu Mahasabha not to be restricted to Hindus alone. Following the assassination of Mahatma Gandhi by a Hindu fanatic the mahasabha was blamed chiefly for the heinous act and became deeply unpopular. Mukherjee himself condemned the murder and left the party. The then Prime Minister Jawahar Lal Nehru inducted him in the interim Central Government as a Minister for Industry and Supply. On issue of 1949 Delhi pact with Pakistani Prime Minister Liyaqat Ali Khan. Mukherjee resigned from the cabinet on 6th April 1950. Mukherjee was firmly against Nehru’s invitation to the Pakistani Prime Minister and their joint pact to establish minority commissions and guarantee minority rights in both countries. He wanted to hold Pakistan directly responsible for the terrible influx of millions of Hindu refugees from east Pakistan , who had left state fearing religious suppression and violence aided by the state. Mukherjee considered Nehru’s actions as appeasement and was hailed as a hero by the people of west Bengal. After consultation with shri Golwalkar Guru ji of RSS Mukherjee founded Bharatiya Jana Sangh on October 21 1951 at Delhi and he became the first president of it . In 1952 elections Bharatiya Jana sangh won 3 seats in Parliament of India including his seat. The Bhartiya Jana Sangh (BJS) also favoured a uniform civil code governing personal law matters for both Hindu and Muslims, wanted to ban cow slaughter and end the special status given to the Muslim – Majority state of Jammu and Kashmir . The BJS founded Hindutva agenda which became the wider Political expression of India’s Hindu Majority.
He opposed the Indian National Congress’s decision to grant Kashmir a special status with each own flag and Prime Minister. According to Congress’s decision, no one including the President of India could enter into Kashmir without the permission of Kashmir’s Prime Minister. In opposition to this decision, he once said ” Ek Desh Mein” Do Vidhan”, ” Do Pradhan” And “Do Nishan” Nahi Challangae ” (A single country can’t have two constitutions, two Prime Ministers and two National Emblems) Dr. Shyama Prasad Mukherjee went to visit Kashmir in 1953 and observed a hunger strike in protest the law that prohibited Indian Citizens from settling in a state within their own country and mandated that they carry ID cards Mukherjee wants to go to Jammu and Kashmir but because of the prevailing permit system, he was not given permission. He was arrested on 11th May while crossing border into Kashmir. Although the ID-card rule was revoked owing to his efforts, he died as detenu on 23rd June 1953 under mysterious circumstances.
Dr. Mukherjee was arrested on entering Kashmir on 11th May 1953, thereafter he was jailed in a dilapidated house. Dr. Shyama had suffered from dry pleurisy and coronary troubles and was taken to hospital one and a half months after his arrest due to complications arising from the same. He was administered Penicillin despite having informed the doctor -in- charge of his allergy to pencillin and he died on 23rd June 1953. No post mortem was ordered in total disregard of the rule. Maulana Azad, who was acting Prime Minister (in absence of Nehru, who was away in London) did not allow body to be brought to Delhi and dead body was directly flown to Calcutta. His death in custody raised wide suspicion across the country and demands for independent enquiry were raised, including earnest requests from his mother, Jagmaya Devi to Jawahar lal Nehru. Nehru declared that he had enquired from a number of persons who were privy to the facts and according to him, there was no mystery behind Mukherjee’s death. His death therefore remains a matter of some controversy. Atal Bihari Vajpayee claimed in 2004 that the death of Mukherjee was a conspiracy. However it was Mukherjee Martyrdom, which later compelled Nehru to remove permit system, post of Sadar -e- Riayast at and of Prime Minister of Jammu and Kashmir.