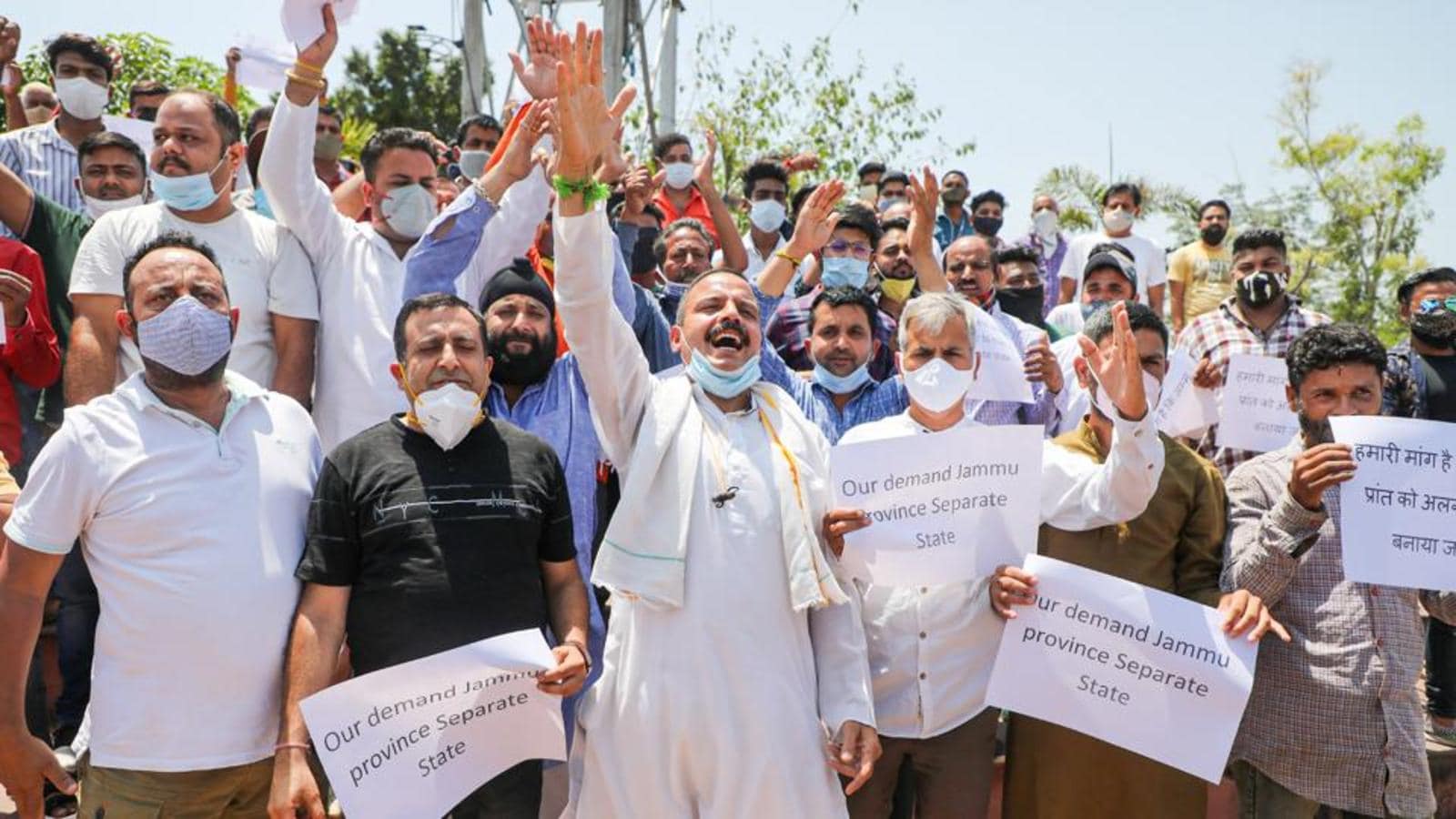 Prime Minister Narendra Modi’s all-party meet scheduled for June 24 has stirred a hornet’s nest in Jammu where pro-Jammu parties feel enraged over what they called “BJP’s appeasement politics of inviting Kashmir-centric and pro-separatists parties to the meeting and giving negligible share to them.”

Under sweltering sun, outfits such as the Panthers Party, the Dogra Front and the PoJK Refugees Front staged protests in Jammu. The Panthers Party activists led by former minister Harsh Dev Singh staged a vociferous protest and burnt the effigy of the BJP for “neglecting Jammu region in all party-meet and development programmes”.

“We are protesting over the way political parties of Jammu are being neglected. Kashmir has always remained a pampered child, while Jammu has always been neglected, be it jobs, tourism, power, development projets, assembly seats, or allocation of funds. In this all-party meet, Jammu has been given a negligible share, but from Kashmir leaders who talk about separatism and separatists are being invited. Even those who do not want to attend are being persuaded,” he rued.

“We have no hope from BJP leaders from J&K because they surrendered before the PDP in the past and played a second fiddle. The Congress unit will also toe the central line. Then who will talk about Jammu? It’s an attempt to subjugate Jammu, which will have far-reaching consequences on the region and its people,” he added.

“Farooq Abdullah sought China’s help for the restoration of Article 370. Mehbooba Mufti made derogatory remarks against the Tricolour. And they have been invited to the all-party meeting, but Jammu’s nationalist and patriotic political leaders have been ignored. Displaced Kashmiri Pandits who were driven out of their homes in the Valley by terrorists have also been neglected,” Gupta said.

Ikkjutt Jammu (United Jammu), a Jammu-based political party, has also slammed the Modi government for “surrendering to Kashmir-centric parties”. Party president Ankur Sharma has said that the government is committing a big blunder by inviting the Kashmiri parties.

“The Centre has invited parties from Kashmir, who are not even recognised, but the political parties from Jammu, who took part in elections, were not afforded even a single opportunity of being heard,” he said.

A frontal organisation of the Kashmiri Pandits — Panun Kashmir — has also criticised the decision. Ajay Chrungoo, chairperson of Panun Kashmir, said, “The government is negating everything which had been achieved following the revocation of Article 370 and 35A. The dialogue process started by the government is a clear testimony to the fact that the government still wants to run J&K through halfway separatism. This is a political suicide.”

PoJK Refugee Front, which staged a protest outside the local Press Club, sought 24 assembly seats for them. “Those who are distress have not been called for the meeting,” he said.

The meeting has its own sanctity: J&K BJP president

Without according much priority to the demands of People’s Alliance for Gupkar Declaration (PAGD), the president of Jammu and Kashmir Bharatiya Janata Party (BJP), Ravinder Raina, on Tuesday said, “The all-party meeting by the Prime Minister has its own sanctity and all the issues which are in the interest of the people of Jammu and Kashmir will be discussed.”

He, however, added that “J&K was, is and shall remain an integral part of India”.

Addressing mediapersons after holding an impromptu meet here, Raina said, “Since PM Modi has invited all parties with an open mind and a big heart, therefore we should also talk about Ek Bharat, Sreshth Bharat.”

“The PM has invited all parties from J&K to discuss the issues and problems. He was the one who strengthened grassroots level democracy in Jammu and Kashmir after 70 years of successive rule by various parties. He was the one who tried to do justice with West-Pak refugees, PoJK refugees, Pahari speaking community, Gurkha and Valmiki communities and women,” he said.

“I am confident that all the leaders invited there will take part and with an open mind and heart will discuss all issues before the PM,” he said in a clear reference to PAGD.