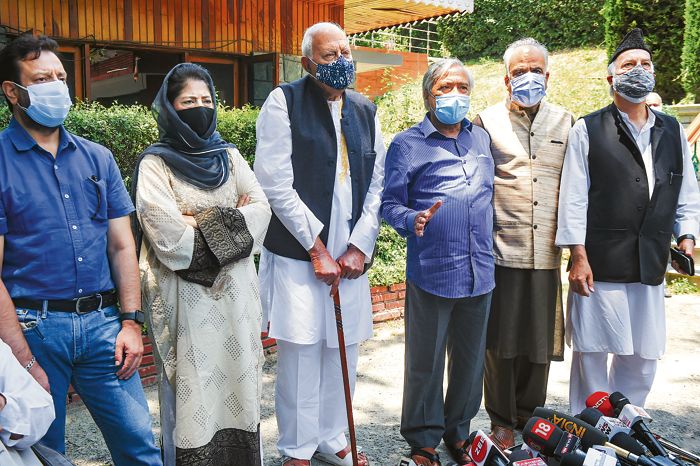 The stage is set for comprehensive discussions on Jammu and Kashmir with all major parties invited for PM Narendra Modi’s June 24 outreach on the issue accepting the invitations.

Both the Congress and the six-party People’s Alliance for Gupkar Declaration (PAGD) held internal deliberations on Tuesday and decided to send their representatives for the government meeting. The outfits, however, clarified that their demand for full statehood to J&K was intact. Noting that the position of the PAGD was clear and need not be repeated, alliance chairman and National Conference president Farooq Abdullah said, “We are confident we will be able to put forth our stand before the PM and Home Minister (Amit Shah) at the meeting.” The PAGD was formed to work for the restoration of Articles 370 and 35-A and statehood in J&K.

PAGD vice-chairperson and PDP chief Mehbooba Mufti said her party favoured a dialogue to resolve long-standing issues. “We will talk about what has been snatched from us, that it was a mistake and was illegal and unconstitutional…. They are talking to the Taliban in Doha. They should talk to everyone in J&K and with Pakistan also for the resolution,” she said. The PDP chief also said political prisoners should be released and those lodged outside of J&K should be brought back to restore confidence.

The Congress reiterated its demand for full statehood to J&K and said its stand on Article 370 abrogation remained the same as articulated in the CWC resolution dated August 6, 2019, which said, “Article 370 is the constitutional recognition of the terms of the Instrument of Accession between the State of Jammu & Kashmir and India. It deserved to be honoured until it was amended, after consultation with all sections of the people, and strictly in accordance with the Constitution.”

The government has not spelt out any agenda and said discussions would be freewheeling. Delimitation would be high on priority with the government determined to conduct elections in the UT after the exercise concludes.