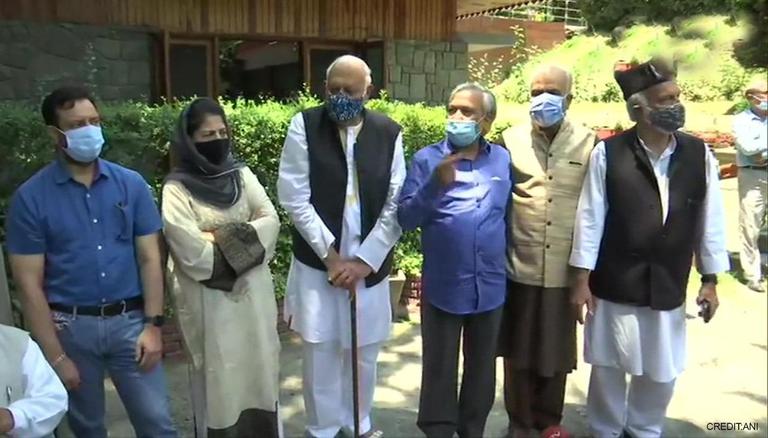 In a major development ahead of the June 24 all-party meeting called by Prime Minister Narendra Modi, the leaders of the People’s Alliance for Gupkar Declaration (PAGD) have declared that they will attend the meeting. The leaders of the Gupkar Alliance met at National Conference (NC) Chairman Farooq Abdullah’s residence to discuss the all-party meeting. Following their discussions, the PAGD members briefed the media.

‘We will attend the meeting; hope to keep the agenda before the PM’

Emphasising the agenda of the Gupkar alliance, NC Chairman Farooq Abdullah revealed that the Gupkar Alliance members will attend the meeting and place their demands before Prime Minister Narendra Modi and Home Minister Amit Shah. In addition, he also stated that the alliance will later brief on the demands made by them at the all-party meeting.

“As you all know that PM Modi has invited us for the all-party meeting on June 24. Therefore, we held a meeting today and decided that we will attend the all-party meeting. We hope that we shall put forth our demands in front of the Prime Minister and the Home Minister. After the meeting, we will brief you on it,” said Farooq Abdullah

Abdullah further expressed hopes that individual leaders of individuals parties will be allowed to place their demands in front of Prime Minister Modi. In addition, he informed that he will attend the meeting with PDP chief Mehbooba Mufti and CPI(M) leader Mohammed Yousuf Tarigami. Apart from this, the other leaders who have been invited will join the meeting, the NC Chairman added.

“We hope that during this meeting, individual leaders of individual parties are allowed to put forth their issues and demands.” he added

“We are not going to demand for stars. But we will demand about what was our and what should still be ours. We are not aware of their agenda, but all I know is what our leaderships wishes, we shall put forth the same as we got a chance. We will go there to advocate for our people of Jammu & Kashmir and Ladakh,” added Tarigami

‘We are not against dialogue, but confidence-building measures necessary’: Mehbooba Mufti

Peoples Democratic Party (PDP) Chief Mehbooba Mufti maintained that the PAGD alliance is not against dialogue between them and the Centre. However, Mufti has asserted that before the all-party meeting, ‘confidence-building measures’ from the Centre’s side were necessary. Citing COVID-19, Mufti remarked that many prisoners across the country were released expect for the ones in Jammu and Kashmir. She has therefore

“We are not against dialogue but some confidence-building measures are necessary before the meeting. Many prisoners across India were released. However, the same did not happen in J&K. The political prisoners and other detainees that have been humiliated since last two years should have been released if they really wanted to reach out to the people for J&K or us. However, this does not mean that we are against the dialogue between us and the Centre,” said Mufti.

“All of us are going to attend the meeting. We don’t know what their agenda is but we will put our agenda before them,” Mufti added.

The PDP chief expressed that the prisoners are released or at least shifted to Jammu and Kashmir as families have to travel to other parts of the country to meet the ones who are imprisoned. The PDP chief has maintained that the Gupkar Alliance will try to ensure confidence-building measures.

“We will try to ensure confidence-building measures like releasing the political prisoners. People here are distressed in the last two years. They endured losses after 2019. Transport and Tourism was affected badly. However, all this is for later. First, we will put forth our agenda. The agenda for which this alliance was formed. We will try to talk to them about the unconstitutional measures that were taken.” said Mehbooba Mufti

However, the PAGD alliance members have asserted and maintained that there will be no compromise on Article 370 and 35A. In addition, another leader of the alliance informed that they will consider the Centre’s agenda on Jammu and Kashmir only if it is in favour of Kashmir and Ladakh. Else, the alliance has maintained that it will not accept and not sign anything.