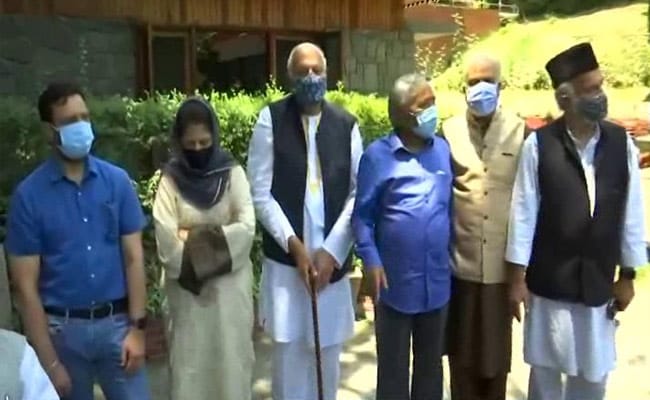 Jammu and Kashmir: Gupkar Alliance members met to discuss invite for the meeting with PM Modi.

Last week, sources said PM Modi called the all-party meeting amid reports that the Centre may discuss restoration of statehood and other important issues concerning the union territory. This is PM Modi’s first major outreach to end the political impasse over ending Jammu and Kashmir’s special status in 2019.

Peoples Democratic Party (PDP) chief Mehbooba Mufti was among those who participated in the second meeting of the People’s Alliance for Gupkar Declaration (PAGD) to discuss the Centre’s invitation for the all-party meeting with the Prime Minister.

“Mehbooba-ji, Md Tarigami sahib and I will attend the all-party meeting called by PM. We hope to keep our agenda before PM and HM (Home Minister),” says Dr Abdullah told reporters after today’s meeting, adding that they will put forth their demands of the restoration of Jammu and Kashmir’s special status and statehood.

The Gupkar Alliance is a seven-party alliance of mainstream parties, formed to campaign for the restoration of special status to Jammu and Kashmir.

“Statehood (for Jammu and Kashmir) is the Prime Minister’s own commitment. They won’t be doing us a favour by giving us statehood back. Gupkar Alliance has been formed for the restoration of what was taken away from us on August 5, 2019,” Ms Mufti told NDTV.

“There can be no compromise on Article 370 and 35A,” alliance member Muzaffar Shah said.

Top leaders in Jammu and Kashmir – including Ms Mufti, Farooq Abdullah and Omar Abdullah – were arrested just before the Centre announced the big decisions in parliament. The three former chief ministers were released later.

NDTV had, earlier this month, reported that the Centre was likely to start the political process that has been virtually non-existent since 2019.

The Centre is also expected to discuss assembly elections in Jammu and Kashmir, due since 2018, when the BJP snapped ties with its coalition partner and then Chief Minister Mehbooba Mufti.

Local body polls in Jammu and Kashmir were held in December; the Gupkar Alliance won more than 100 seats and the BJP emerged as the single largest party with 74 seats.