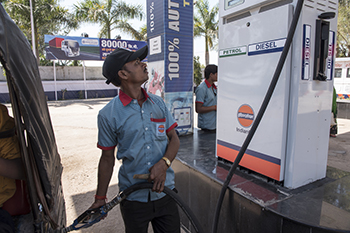 As per price notification by state-owned fuel retailers, petrol and diesel prices across the country to a historic high and it has increased again by 25 to 28 paise.

Petrol price hit an all-time high with an increase of 27 paise at Rs103.63 a litre from the previous day price of Rs103.36 per litre in Mumbai. Diesel prices also increased by 28 paise at Rs95.72 per litre in the financial capital.

Now, Patna and Thiruvananthapuram are inching towards this psychological landmark with petrol retailing at Rs99.55 and Rs99.48 respectively.

The prices of petrol and diesel in Delhi hiked by 28 paise and 26 paise respectively.

In Madhya Pradesh’s Anuppur district, petrol today is priced at Rs108.30 a litre and diesel at Rs99.31.

Petrol and diesel rates are at the highest in the country in Sri Ganganagar district of Rajasthan where petrol comes for Rs108.67 a litre.

Meanwhile, crude oil prices rose, with Brent hitting $75 a barrel for the first time since April 2019 amid global oil demand and as concerns eased over an early return of Iranian crude. Brent crude futures for August climbed 29 cents, or 0.4% to $75.19 a barrel.