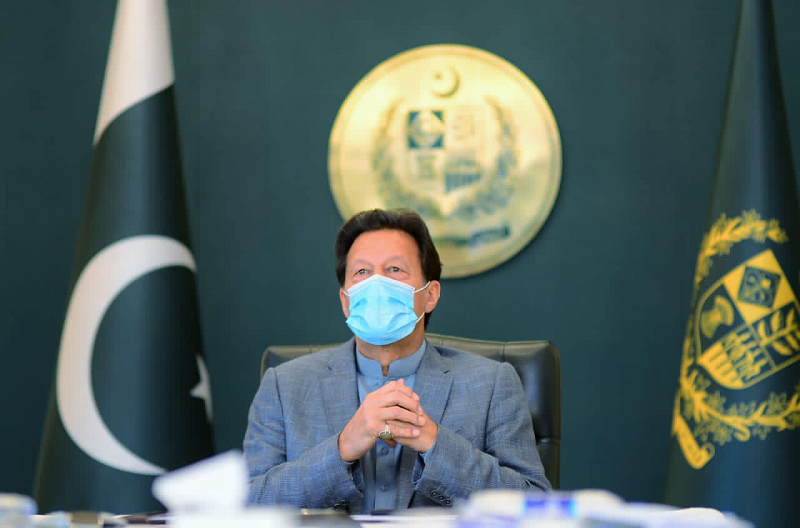 ISLAMABAD: Prime Minister Imran Khan has said that the Kashmir dispute, which holds the 1.4 billion people of South Asia hostage, could be settled if the United States showed a ‘resolve and will’.

“This festering can ease if the US has the resolve and will. This can be sorted out,” he said in an interview with Jonathan Swan of ‘Axios on HBO’ aired on Monday.

The ‘Kashmir dispute’ was put on top agenda by the prime minister as the interviewer asked him about the priorities of discussion when he meets US President Joe Biden in future.

PM Imran said that “almost 1.4 billion people in the sub-continent are held hostage with one dispute of Kashmir” and the United States being a powerful nation of the world had a big responsibility in that regard.

The Kashmir dispute, he said, needed a settlement as per the resolutions of the United Nations Security Council that called for a plebiscite to let the Kashmiris decide about their own future.

The prime minister pointed out that the West was ignoring the genocide in Kashmir, with hundreds and thousands of Kashmiris killed by the Indian troops.

“This is such a big issue in the Western world as why are the people of Kashmir ignored,” he said, adding the Kashmir issue was “much more relevant” where 800,000 Indian troops had put the nine million Kashmiris in ‘jail’.

“Why is this not an issue? This is hypocrisy,” he said, referring to the apathy of the West towards the plight of Kashmiri people facing the humanitarian crisis for decades.

Asked about Pakistan’s “growing nuclear capability”, he said Pakistan’s nuclear arsenal was “simply for its own defence” in the scenario of a country seven times of its size.

He expressed the belief that the resolution of the Kashmir issue would lead the two countries towards peace.

“The moment there is a settlement on Kashmir, I believe Pakistan and India will live as civilized neighbours without nuclear deterrence,” he said.

On the withdrawal of US troops from Afghanistan, he stressed that there must be a prior “political settlement” as military solution was not the viable option.

He hinted at the possibility of a civil war if the US troops pulled out without a political settlement, which, he explained, as the “coalition government with Taliban and others as stakeholders”.

Asked whether Pakistan would like to welcome the Taliban into the comity of nations, he said, “As far as Pakistan is concerned, whoever is representing the people of Afghanistan, we would deal with them.”

PM Imran categorically said that Pakistan would “absolutely not” allow any bases and use of its territory for any sort of action inside Afghanistan.

“Absolutely not. There is no way we are going to allow any bases, any sort of action from Pakistani territory into Afghanistan. Absolutely not,” he said, in response to the question if he would allow the American government to have CIA (Central Intelligence Agency) conduct counter-terrorism missions in Pakistan against Al-Qaeda, ISIS or the Taliban.

“We will be partners in peace, not in conflict,” he said. Pakistan could not afford any more military actions from its soil as it was the country that suffered most after Afghanistan, he added.

To a question if Pakistan would allow the US to use its air space for strikes, he said, “Such an approach of the US [of airstrikes] did not work for 20 years. Why would it work again?”

On “doing vastly better than the United States” on Covid-19, the prime minister said that partial lockdown coupled with comprehensive data analysis helped his government keep the pandemic in control.

Smart lockdown was the “best decision” to cope with the situation, he added.

PM Imran recalled that with the people in Spain and Italy ending up in hospitals as Covid-19 raged through Europe, there was a big temptation by the politicians from the opposition for a total lockdown. However, he said, he opted for smart lockdown given the problems of the poor.

He mentioned that an effective working of the National Command and Operation Centre with daily data monitoring and input by the provinces, army, doctors and health specialists helped the government handle the situation.