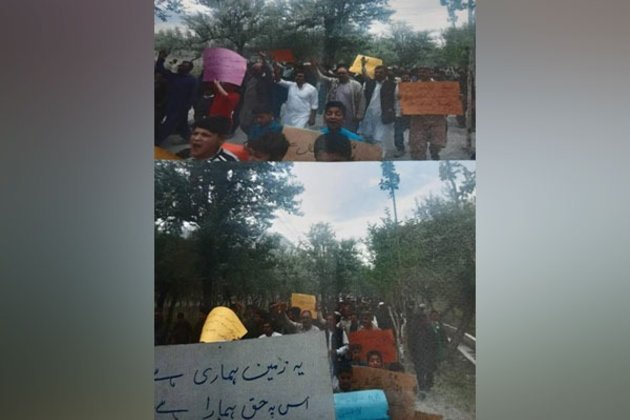 Skardu (Gilgit-Baltistan) [PoK], June 21 (ANI): The Nationalists and Civil Society staged a protest at Skardu, Giligit Baltistan, on Sunday and Monday against the Pakistan Air Force (PAF) for acquiring land for expansion of the Skardu airport without compensation.

The PAF has declared the acquired vacant land as government land for which no compensation could be considered. But the protesters are demanding Pakistan Rupees 2.5 lakh per canal as compensation. Meanwhile, United Kashmir People’s National Party (UKPNP) has expressed deep concerns over human rights violations in Pakistan, occupied Jammu and Kashmir and Gilgit Baltistan.

“The local population of so-called Azad Kashmir and Gilgit Baltistan do not enjoy any basic political rights. As brought out by Human Rights Watch, the government represses democratic freedoms, muzzles the press and practices routine torture,” the letter said.

The letter further said tight controls on freedom of expression have been a hallmark of government policy in the area.

“Pakistan has prevented the creation of independent media in the territory through bureaucratic restrictions and coercion. Under the interim constitution of “Azad Kashmir”, which Pakistan enforced in 1974, aspiring candidates are “pre-screened” to ensure that only those who support Kashmir’s annexation with Pakistan can contest elections. Anyone who wants to take part in public life in Pakistan Administered Kashmir has to sign a “Pledge of loyalty to Pakistan”, while anyone who publicly supports or peacefully works for an independent Kashmir faces persecution,” it said.

“In so called Azad Kashmir and Gilgit Baltistan Nationalists leaders and political workers and human rights defenders are facing sedition charges. Section 124-A is related to sedition, which states that whoever brings into hatred or contempt the federal and provincial government shall be punished with imprisonment up to life, to which fine may be added,” the letter added. (ANI)