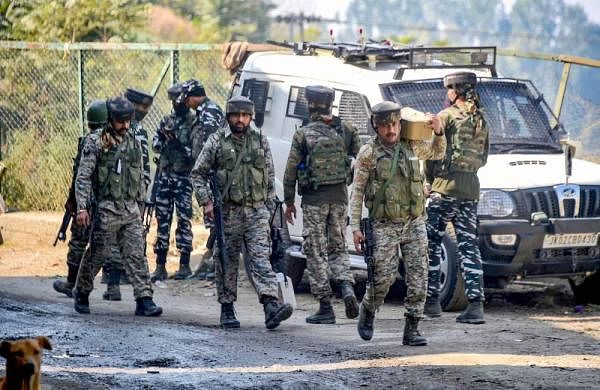 SRI NAGAR: Three Lashkar-e-Toiba commanders, including a Pakistani, who were involved in killing of security personnel and panchayat members, were shot down in an encounter at Sopore in north Kashmir’s Baramulla district on Monday.At a press conference, DGP Dilbagh Singh said the operation was jointly launched by police, army and CRPF on Sunday evening after receiving inputs about the presence of Lashkar militants.

Militants fired on the troops and in the gunfight, which continued throughout the night, ended in the morning after Mudasir Pandit and Khurshid Mir, both locals, and Pakistani militant Abdullah alias Asrar were killed. A soldier was hospitalised with bullet injury.Terming the killing of the trio as a major success, Singh said the three were involved in the killing of two municipal councillors and a policeman on March 29 and the killing of two cops and as many civilians on June 12.

To a question, Singh said foreign militants are present in the Valley but they are lying low. “The ceasefire pact between the Indian and Pakistani armies has had a positive impact. But it would be wrong to claim that there are no foreign terrorists. They are here in good numbers and our operations will target them in the coming days,” he said.IG, Kashmir, Vijay Kumar urged  the families of militants to refrain from providing food and shelter to the active militants.  GOC of Army’s Kilo Force, H S Sahi appealed the local militants to give up violence else they would meet the similar fate like their counterparts in Sopore.