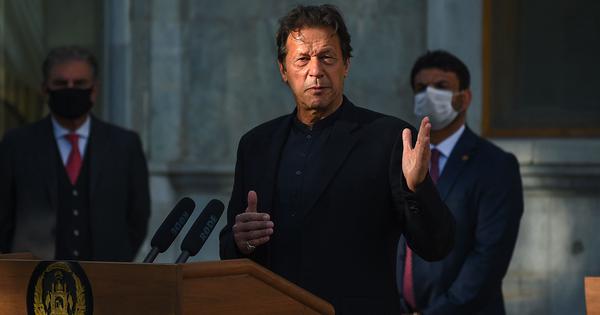 Pakistan Prime Minister Imran Khan has again asked the United States to resolve the dispute related to Jammu and Kashmir, saying that if “the Americans have the resolve, the will, this can be sorted out”, reported the Hindustan Times, citing an interview to American news website Axios.

Khan has repeatedly urged world leaders to intervene in the Jammu and Kashmir matter after the Indian government on August 5, 2019, took away the region’s special status and split the erstwhile state into the Union Territories of Jammu and Kashmir, and Ladakh.

“A disputed territory, according to the UN Security Council resolutions,” he said in the interview, according to the Hindustan Times. “There should have been a plebiscite for the people of Kashmir to decide about their own future. That has never taken place, it is festering.”

Khan said it was hypocrisy to focus on the human rights violations of Uighur Muslims in China and not Jammu and Kashmir. “Hundred thousand Kashmiris have been killed…literally it’s an open prison in Kashmir…nine million Kashmiris have been put there…why is that not an issue?” the Pakistan prime minister told Axios.

The Pakistani prime minister was asked about the opinion of intelligence experts, who said that the country has been rapidly increasing its nuclear arsenal, reported The Kashmir Walla.

“I don’t know where they [analysts] have come up with this,” Khan said in the interview. “Pakistan’s nuclear arsenal is simply a deterrent, to protect ourselves. As far as I know, it is not an offensive thing. Any country which has a neighbour seven times its size would be worried.”

Khan, however, said he was opposed to nuclear arms. “The moment there is a settlement on Kashmir, the two neighbours would live as civilised people. We will not need to have nuclear deterrents,” he said, according to The Kashmir Walla.

When the interviewer questioned Khan’s silence on the condition of Uighur Muslims in China, the prime minister said he had spoken to Beijing behind “closed doors” about certain matters with which Pakistan had a problem.

The interviewer further asked the prime minister whether it made him “sick to have to be quiet because of all this money they are putting into Pakistan”. To this, Khan said that there were a lot of atrocities in Syria and other countries but he would not be able to speak about everything.

“I concentrate on what is happening on my border…in my country,” the prime minister said. When it was pointed out that China and Pakistan share a border, Khan said “this [human rights violations] was not the picture” that was presented by Beijing.

“Our discussions with [the] Chinese will always be behind closed doors,” Khan said.

In May, Khan had said that Islamabad will not hold talks with India till New Delhi reversed its decision to revoke special status granted to Jammu and Kashmir under Article 370 of the Indian Constitution.

India has maintained that Jammu and Kashmir is an integral part of India and matters relating to the region was the country’s internal matter. New Delhi has repeatedly criticised Pakistan for bringing up the matter in global forums.

The relationship between the two countries had deteriorated after India abrogated the special status granted to Jammu in Kashmir on August 5, 2019. However, their relations saw multiple positive developments a few months ago.

In February, the two countries released a rare joint statement, announcing a ceasefire along the Line of Control. The declaration reaffirmed the commitment of the countries made during the 2003 ceasefire agreement. Prime Minister Narendra Modi and Khan also exchanged letters in March, expressing their intentions to establish “cordial relations”.

However, the positive developments took a hit in April after Pakistan deferred the decision to import cotton and sugar from India just a day after the country’s top decision-making body on commerce lifted a ban to facilitate the trade. Pakistan had then said that the bilateral relations could not be normalised unless India revokes the August 5, 2019, decision.

Later in April, a top United Arab Emirates diplomat said that the country was mediating between India and Pakistan to help them reach a “healthy and functional” relationship. His comment had come after Reuters reported that top intelligence officers from India and Pakistan held “secret talks” in Dubai in January to ease military tension regarding Kashmir.