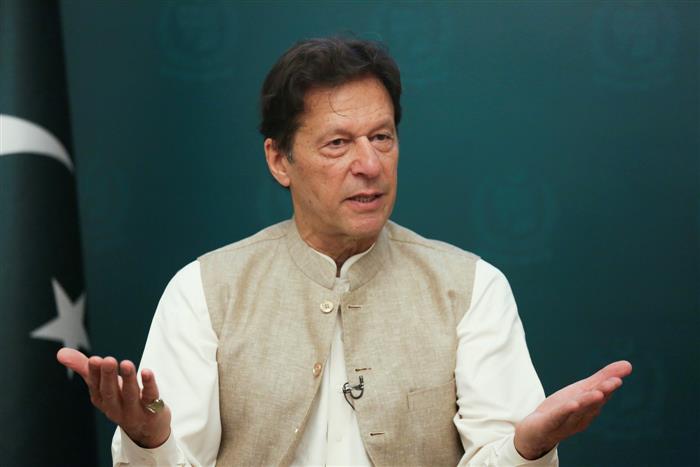 Pakistan’s nuclear arsenal is “simply a deterrent” to protect the country and there will no longer be any need for it once the Kashmir issue is resolved, Prime Minister Imran Khan has said as he asserted that if the Americans have the resolve and the will, the issue can be sorted out.

Khan said that he was “not sure” whether it was growing. “As far as I know, it’s not an offensive thing. Any country which has a neighbour seven times its size would be worried.”

Khan went on to say that he was “completely against nuclear arms”.

Asked why he was so outspoken about Islamophobia in the West but silent about the alleged genocide of Uighur Muslims in China’s Xinjiang, Khan said that all issues were discussed with China “behind closed doors”.

“Why is that (Kashmir) not an issue?” Khan asked, adding that he considered it to be “hypocrisy”.

The moment you say Islamic terrorism, the common man in the West thinks there is something within the religion which leads to terrorism, he said. After 9/11 any time there was a terrorist act where a Muslim was involved, 1.3 billion Muslims across the world started becoming targets, he said.

He went on to say that there were also feelings of anxiousness. “Without a political settlement there is the possibility of a civil war.”

He stated that in his view, a political settlement would mean a coalition government between the Taliban and the Afghan leadership. “There is no other solution.” Asked whether the US had made a mistake by announcing the date of the withdrawal, Khan said: “They have got themselves in such a big mess. They had to give some sort of timeframe, but the moment they gave a timeframe the Taliban would have considered that a victory.”

“Would you allow the American government to have the CIA here in Pakistan to conduct cross-border counterterrorism missions against Al-Qaeda, ISIS or the Taliban?” the interviewer asked.